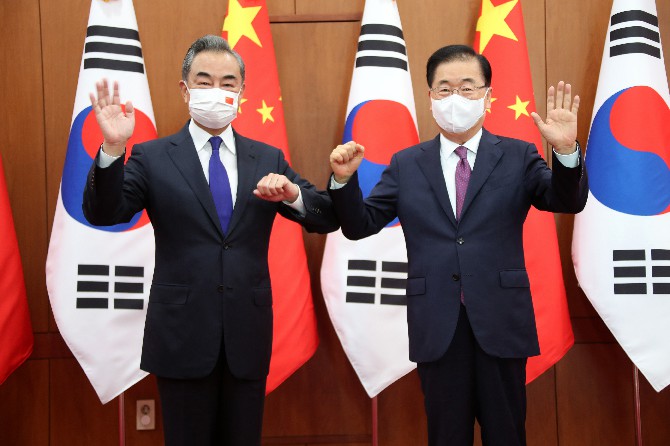 The foreign ministers of South Korea and China met Wednesday for talks expected to focus on North Korea and other regional security issues, two days after North Korea claimed to have tested a newly developed cruise missile.
North Korea said Monday it had successfully tested the missile twice over the weekend that it said hit targets 1,500 kilometers away, a range that is enough to strike all of Japan including U.S. military bases there. It was North Korea’s first weapons launch in six months and came amid a stalemate in its nuclear diplomacy with the United States.
On Wednesday, South Korean Foreign Minister Chung Eui-yong was expected to ask China to play a more active role in persuading North Korea to return to the nuclear negotiations during a meeting with his Chinese counterpart Wang Yi in Seoul.
While there are questions about China’s influence on North Korea, Beijing is still North Korea’s last major ally and aid benefactor. More than 90% of North Korea’s trade goes through China, though bilateral trade volume has nosedived since North Korea closed its international borders early last year at the start of the coronavirus pandemic.
During Wednesday’s talks, some observers say Wang would also seek to strengthen ties with South Korea to try to prevent it from titling too much toward the United States amid intense rivalry between the world’s two biggest economies. They say China worry about a U.S. plan to recalibrate its foreign policy toward growing challenges posed by China and Russia following its troops’ withdrawal from Afghanistan.
South Korea has been struggling to strike a balance between the United States and China. It’s a key traditional U.S. ally where about 28,500 American troops are deployed to deter potential aggression from North Korea. But its export-driven economy heavily relies on China, its biggest trading partner.
North Korea’s cruise missile launch isn’t a violation of U.N. Security Council resolutions that bar North Korea from conducting ballistic missile tests. Some experts say North Korea might have chosen a cruise missile, not a ballistic one, not to put its ally China, a veto-wielding U.N. Security Council member, into a difficult situation.
Experts say North Korea wants greater support from China as its struggling economy has been further slammed by the pandemic-related border shutdowns, U.S.-led sanctions and natural disasters.
Wang has also recently traveled to Singapore, Cambodia and Vietnam. HYUNG-JIN KIM, SEOUL, MDT/AP