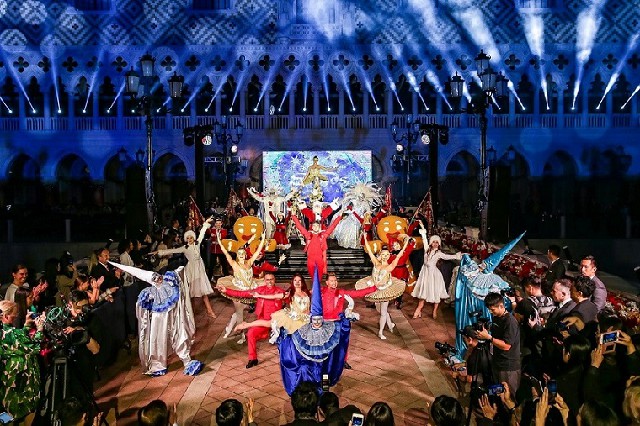 Sands Resorts Macao got the festive season off to a start last week with an unveiling event for Christmas trees and decorations at The Venetian Macao and The Parisian Macao, “along with superb entertainment,” the company said in a release.
Guests and visitors can enjoy the celebrations until January 2, while a wide range of seasonal dining, accommodation and shopping offers are also available until January 10, 2020.
Wilfred Wong, President of Sands China Ltd., and Ricky Hoi, Acting Director of the Macao Government Tourism Office, which is supporting the Winter Extravaganza programme, officiated the event. The launch included a state-of-the-art 3D light and sound show as a tribute to the 20th anniversary of the establishment of the Macao Special Administrative Region, projecting festive themed images onto The Venetian Macao’s 43,000-square-feet façade every 30 minutes nightly.
Other attractions include a 50-foot inverted tree hanging from the ceiling in the lobby rotunda of The Parisian Macao, inspired by the original at the famous Galerie Lafayette department store in Paris, which will make a unique backdrop over the festive season.
At The Venetian Macao’s lagoon area, another tree was officially revealed alongside enchanting decorations, including a Christmas train, ‘The Venetian Express’, featuring Santa and his grotto ready to welcome visitors.