Singapore | Grocery chain starts limiting how much people can buy 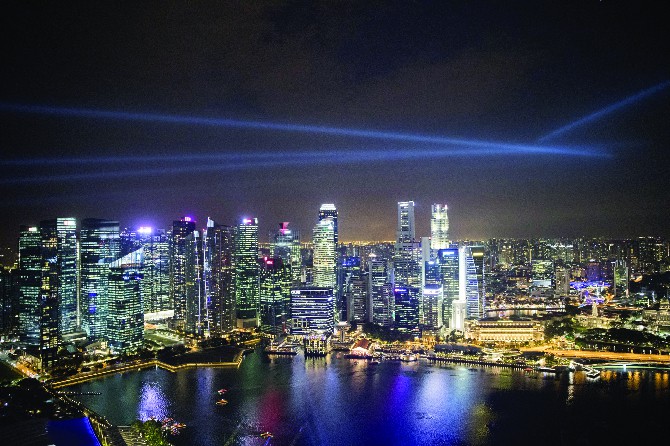 Singapore authorities urged residents to relax on their shopping sprees that have emptied supermarket shelves, saying supplies aren’t under threat even as response efforts to battle the coronavirus outbreak have escalated.
Pictures circulated online of snaking lines at supermarkets as people snapped up rice, instant noodles, toilet paper and sanitization products. Online grocers including Amazon.com Inc. and RedMart Ltd. said they have limited or no delivery slots.
Yesterday, local supermarket chain NTUC FairPrice imposed some purchase limits “to ensure more customers have access to high demand items,” according to notices put up in outlets. Each shopper can buy up to four packs of paper products, two bags of rice, four bundles of instant noodles and SGD50 ($36) worth of vegetables.
Singapore raised its response level to the virus to Orange on Friday, the same grade as during the SARS epidemic. The designation means the nature of disease is severe and spreads easily from person to person, but is being contained in the city-state, where it hasn’t spread widely.
Authorities reported seven more confirmed cases of the virus late Saturday, bringing Singapore’s total to 40 – the largest number of infections outside China, excluding a quarantined cruise ship in Japan. Four victims are in critical condition, and one is on oxygen support, the government said. All the new cases are Singapore citizens or permanent residents, and none had traveled to China recently.
How Singapore residents react to the virus outbreak “is a major test for our nation,” Prime Minister Lee Hsien Loong said in a Facebook post Saturday.
“There is no need to panic,” he said later. “We are not locking down the city or confining everybody to stay at home. We have ample supplies, so there is no need to stock up with instant noodles, tinned food, or toilet paper, as some people did yesterday.”
Lee joined a chorus of officials reacting to a scene that’s playing out across the island. For weeks, stocks of hand sanitizers and masks have disappeared as quickly as they were being replenished, and panic buying has now spread to other daily goods.
“In times of uncertainty, it is natural that we want to protect ourselves and the ones that we love,” Trade and Industry Minister Chan Chun Sing said in a Facebook post Saturday. “However I urge all of us to think of the larger communities we belong to. Hoarding means that we deprive others of things that they really need.” Michelle Jamrisko, Bloomberg