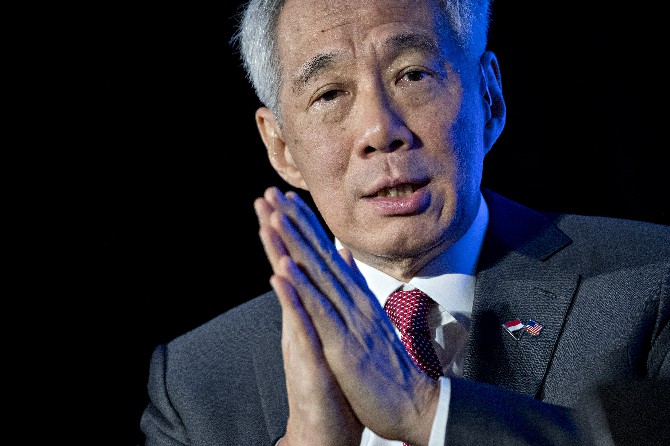 The first-phase trade deal between the U.S. and China doesn’t signal an end to tensions between the world’s top two economies, according to Singapore Prime Minister Lee Hsien Loong, who warned that Asia is now at a turning point as the nations jostle for influence across the region.
“We’re relentlessly optimistic, but not that much so,” Lee said in a 30-minute dialog at the World Economic Forum in Davos yesterday. Tensions between the pair have yet to peak as Washington seeks to adapt to a rising China, whose economy will eclipse the U.S.’s, Lee told the audience.
The U.S. and China struck an interim deal on trade this month, with Beijing agreeing to step up purchases of goods from America, and a second-phase agreement is meant to be in the works. Singapore, a trade-dependent city-state in Southeast Asia, has been buffeted by the conflict as growth slowed.
“Now we are at a turning point, all three of these factors are changing,” Lee said, referring to the roles of the U.S. and China in Asia, as well as the pace of globalization. The “security balance, strategic balance in the region is shifting because China has become more influential, a more substantial participant.”
Previously, Lee has warned that Southeast Asian nations might one day be forced to choose between the U.S. and China if the world economy gets pulled apart into different blocs – a theme he revisited in his remarks in Davos.
“That means you must have the courage to stand up and call things as they are,” he said. “And from time to time, you will incur at least a raised eyebrow, and sometimes more than one raised eyebrow from one side or the other and occasionally both.” Faris Mokhtar, Bloomberg