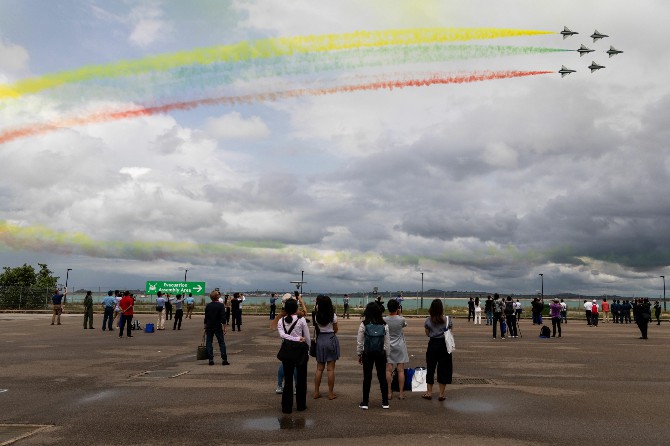 The first day of the Singapore Airshow usually features teeming crowds, flashy presentations and big orders for aircraft makers.
The coronavirus outbreak has shot that to pieces this year as scores of companies steer clear of Asia’s biggest aerospace and defense gathering. People who did attend limited their interaction to bows or uneasy elbow bumps.
Changi Exhibition Centre near the city-state’s airport is dotted with vacant booths displaying signs from companies apologizing for their absence, while the static display area for aircraft is virtually empty.
Beyond a smattering of deals – Korean Air Lines Co. buying engines from Pratt & Whitney Holdings LLC, PNG Air Ltd. ordering three ATR turboprops and Japan Airlines signing a service agreement with General Electric Co. – there was little action, with rainy weather adding to the gloom.
Concern about the coronavirus grew as the air show approached and more cases were reported beyond the epicenter in China’s Hubei province. Singapore clamped down on arrivals from China, forbidding people who’d recently been to the country from entering. Confirmed cases of infection in Singapore have climbed to 45, making it one of the worst affected places outside China, where more than 1,000 people have died and nearly 43,000 infected.
At the opening ceremony for the expo late Monday, Singapore’s Deputy Prime Minister Heng Swee Keat said the outbreak cast fresh uncertainty on near-term prospects for the global economy. “With the situation still rapidly evolving, it is difficult to gauge the full impact at present,” he said. “If SARS is a reference point to go by, it will be many months before the situation returns to normal.”
Singapore last week raised its disease response level to the same grade used during the SARS outbreak in 2003 and Prime Minister Lee Hsien Loong said it was a “major test for our nation.” The government urged residents to stop hoarding supplies such as toilet paper and instant noodles.
Organizers of Singapore’s biennial airshow, which attracted more than 54,000 trade attendees in 2018, have advised people to follow a no-contact policy in which they should bow or wave instead of shaking hands. That followed news of several coronavirus cases in Europe being traced to a so-called super-spreader who attended a business meeting at Singapore’s Grand Hyatt hotel last month.

Masks discouraged
Very few people wore face masks at the airshow yesterday, heeding the advice on a notice pasted around the halls that said they were only necessary if you are sick. It also told people to cover their mouths if sneezing or coughing.
The handshaking caused some confusion: some attendees extended their hands out of habit and pulled back at the last moment with a nervous laugh. Elbow-bumping appeared to be catching on as a greeting. Organizers also glued sanitizers to desks so they couldn’t be taken away.
The show was deserted even before the scheduled 6 p.m. close, a far cry from previous years when organizers would plead with attendees and reporters to leave. Lights were turned off at several booths and cabs were easily available.
The Singapore Airshow isn’t alone in being affected by the virus.
Intel Corp. and MediaTek Inc. became the latest big names to pull out of Mobile World Congress, the largest annual event for the wireless industry, which is due to start in Barcelona on Feb. 24. Large-scale events in China scheduled for as late as the end of March have been postponed and international art fair Art Basel Hong Kong canceled.
Airbus SE still played a relatively prominent part at the show in Singapore yesterday, unveiling a model of a futuristic blended-wing aircraft named Maveric. Later in the afternoon, Francois Caudron, the Toulouse-based company’s senior vice president of marketing, said it expects to sell 1,000 A321 XLRs in 10 years, the long-range version of the narrow-body A320 family.
Meanwhile, Boeing Co.’s Vice President for Marketing Randy Tinseth said it will take several quarters to get all the 700 or so 737 Max jets grounded around the world flying again, though the company aims to return the model to the skies in mid-2020. Federal Aviation Administration chief Steve Dickson reiterated that there’s no schedule as yet for a Max re-certification flight,
In another interview, jet-engine maker Rolls-Royce Holdings Plc’s president for Southeast Asia, Pacific and South Korea Bicky Bhangu was confident about growth in the region and that the coronavirus would have a short-term impact. Anurag Kotoky, Bloomberg