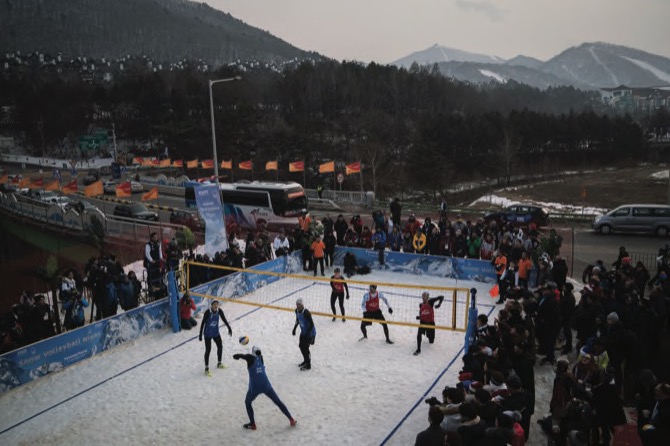 Snow volleyball is not an Olympic sport. Probably never will be. But it had its finest moment yesterday when Prince Albert of Monaco — an International Olympic Committee member — showed up at a chilly outdoor exhibition of snow volleyball at the Pyeongchang Olympics.

With hundreds cheering “Albert, Albert, Albert,” the Monaco royal made a 30-second cameo appearance on an icy court set up amid plastic palm trees outside the Austria House — the country’s promotional venue at the Olympics.

The prince put down his mulled wine, walked on to the court, twirled his right arm to get warm, and put the ball into play.

It was a perfect serve — and a great pitch for the fledgling sport.

“I’m not sure what the possibilities are to include it on the program for the Winter Games, but it’s a nice link between summer and winter sports,” Albert told The Associated Press. “I’ve seen it played before in Switzerland, so I knew about it.”And the mulled wine? “You’ve got to warm up somehow,” Albert said.

They sneered at beach volleyball before it debuted at the 1996 Atlanta Games. Curling. Snowboarding. They’re popular Winter Olympics sports now that were obscure — or didn’t even exist a few decades ago.

Gilbert Godoy — known universally at Giba — also won gold for Brazil in 2004 in the indoor game.”It’s just like moving in the sand, but it’s snow,” he said, showing off the soccer cleats players wear for grip.

“This is a tremendous thing we need to promote,” Giba added.

Snow volleyball is already played in a small European league. And there’s a European championship.

“It’s a serious thing,” said Martin Kaswurm, an Austrian who gets credit for inventing the sport 10 years ago in Wagrain, Austria, not far from Salsburg. He said he set up a court outside his restaurant, got some exposure, and then began promoting it to Austrian ski resorts.

“It caught on and, and here we are.” Vladimir Grbic won gold in volleyball at the 2000 Olympics. The Serbian summed up the frigid game’s appeal. “If you want to achieve something important, you have to be a little crazy,” he said.