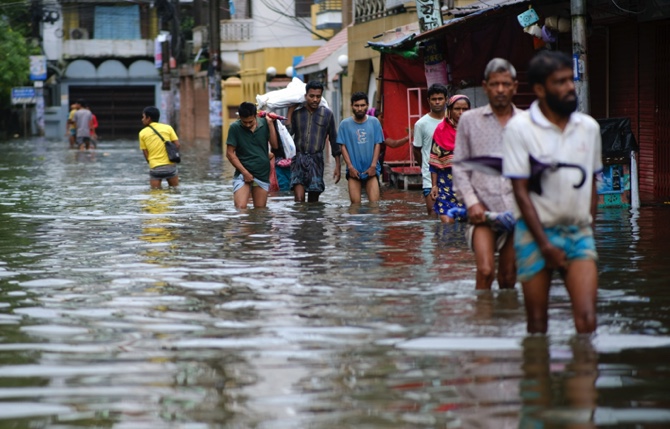 Days of flooding are challenging authorities yesterday in South Asia as they try to deliver food and drinking water to shelters across submerged swaths of India and Bangladesh.

The high water brought on by seasonal monsoon downpours has already claimed more than a dozen lives, displaced hundreds of thousands and flooded millions of homes.

Those who remain in their homes can be seen wading through streets flooded up to their knees. In Sylhet, an eastern Bangladesh city on the Surma River, a man stands in the doorway of his flooded shop, where top shelves are crammed with things in an effort to keep them above water. Two women stand inside a flooded home lit only by the cloudy sky outside. Local TV said millions remained without electricity.

Enamur Rahman, junior minister for disaster and relief, said that up to 100,000 people have been evacuated in the worst-hit districts, including Sylhet. About 4 million people have been marooned in the area, the United News of Bangladesh said.

Flooding also continued to ravage India’s northeastern Assam state where two policemen engaged in rescue operations were washed away by floodwaters Sunday, an official in the state capital Gauhati said.

Officials said nearly 200,000 people were taking shelter in 700 relief camps. Water levels in all major rivers across the state were flowing above danger levels.

Chief Minister Himanta Biswa Sarma said yesterday his administration was in the process of airlifting food and fuel by military helicopters to some parts of the state that were badly affected.

Assam has been reeling from massive floods after heavy torrential rains over the past few weeks made the Brahmaputra River break its banks, leaving millions of homes underwater and severing transport links.

The Brahmaputra flows from China’s Tibet through India and into Bangladesh on a nearly 800-kilometer journey through Assam.

Major roads in Bangladesh have been submerged, leaving people stranded. In the country that has a history of climate change-induced disasters, many expressed their frustration that authorities haven’t done more locally.

“There isn’t much to say about the situation. You can see the water with your own eyes. Water level inside the room has dropped a bit. It used to be up to my waist,” said Muhit Ahmed, owner of a grocery shop in Sylhet.

Bangladesh called in soldiers Friday to help evacuate people, but Ahmed has yet to see any of them firsthand.

“All in all, we are in a great disaster. Neither the Sylhet City Corporation nor anyone else came here to inquire about us,” he said. “I am trying to save my belongings as much as I can. We don’t have the ability to do any more now.”