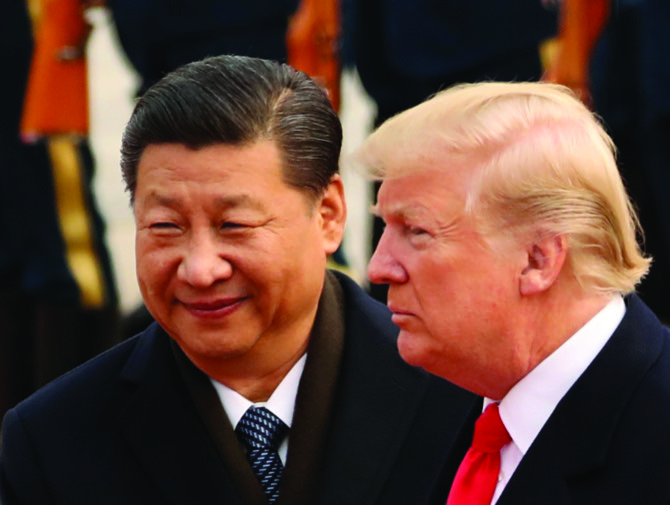 China has demanded the United States stop sending ships and military aircraft close to its South China Sea island claims during talks to prepare for a meeting between President Donald Trump and President Xi Jinping.

The U.S. pushed back Friday, insisting it will continue to “fly, sail and operate wherever international law allows.” In late September, U.S. and Chinese vessels nearly collided close to a disputed reef.

Tensions have also flared amid a bitter trade dispute that Trump and Xi are expected to tackle at the Group of 20 summit in Argentina later this month.

The talks were scheduled to be held in Beijing last month but were postponed after Washington announced new arms sales to Taiwan, and after a Chinese destroyer came close to the USS Decatur in late September in what the U.S. Navy called an “unsafe and unprofessional maneuver.”

“The Chinese side made it clear to the United States that it should stop sending its vessels and military aircraft close to Chinese islands and reefs and stop actions that undermine Chinese authority and security interests,” said Chinese senior foreign policy adviser, Yang Jiechi, who also had sharp words over U.S. support for Taiwan.

However, Yang and Chinese Defense Minister Wei Fenghe also spoke of the need to improve cooperation, including between the U.S. and Chinese militaries, to ease the risk of conflict as the two powers jockey for pre-eminence in the Asia-Pacific.

Vietnam has protested China’s launch of weather stations in the disputed Spratly islands, saying they violate Vietnam’s sovereignty and complicate the situation in the South China Sea.

China last week announced it started operations of the stations on three islands to offer weather forecasts to fishermen in the South China Sea region, neighboring countries and passing ships.

Vietnamese Foreign Ministry spokeswoman Le Thi Thu Hang told reporters at a regularly scheduled briefing Thursday that Vietnam has the legal basis and historical evidence to assert its sovereignty over the Spratlys and Paracels and asked China to stop the action.

The Chinese stations are built on man-made islands constructed atop coral reefs that also have airstrips, radar stations and other military features.

“The fact that China started use of meteorological observation stations on the illegally built structures in the Spratlys has seriously violated Vietnam’s sovereignty over the islands,” she said.

“Vietnam persistently opposes this act and asks China to immediately stop the above-said actions,” she said.

Hang said China should abide by the principles reached between the two countries guiding the settlement of the maritime issues and the Declaration of the Code of Conduct in the South China Sea “without complicating the situation, affecting peace, security and stability” in the South China Sea.

Despite Beijing’s strenuous objections to “outside parties” becoming involved in the South China Sea, a Chinese warship sent friendly greetings to a Japanese navy vessel as part of an overall improvement in relations between the regional rivals.

Japanese state broadcaster NHK reported last week that the message was sent in later October from the Chinese destroyer Lanzhou to the Japanese helicopter carrier Kaga.

“Good morning, glad to see you,” NHK quoted the Chinese message as saying.

China frequently evokes memories of Japan’s brutal World War II invasion and occupation of much of its territory to warn of what it calls the threat of resurgent Japanese militarism. China is also a strong critic of the U.S.-Japanese defense alliance and opposes all actions by their two militaries seen as challenging its claim to almost the entire South China Sea.

China-Japan relations have undergone turbulence but are now “back to a normal track,” Xi told Abe during the first formal visit to Beijing by a Japanese leader in nearly seven years.

Abe’s visit highlights the improvement in ties after they hit a low in 2012 during a dispute over East China Sea islands controlled by Japan but claimed by China.

EDITOR’S NOTE: This is a weekly look at recent developments in the South China Sea, where China is pitted against smaller neighbors in multiple disputes over islands, coral reefs and lagoons in waters crucial for global commerce and rich in fish and potential oil and gas reserves. It is published on Tuesdays. Christopher Bodeen, AP