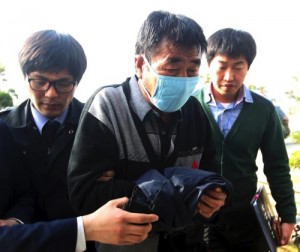 The captain of a doomed South Korean ferry yesterday apologized for abandoning passengers but said he didn’t know his actions would lead to the deaths of more than 300 people, news reports said.
Capt. Lee Joon-seok and three other crew members from the ferry Sewol were indicted on homicide charges alleging they were negligent and failed to protect passengers when the ferry sank in April. Eleven other crew members were indicted on less serious charges. The 15 crew on trial were among the first group of people to leave when the ship began badly listing.
Lee told the trial at the Gwangju District Court in southern South Korea that he will continue to pray for the souls of the dead people until he dies, according to South Korean media including Yonhap news agency. “I committed a grave sin. I’m sorry,” Lee was quoted as saying.
But 68-year-old Lee said he had no intention of killing any of his passengers. “I know I cannot get out of prison, but I must not let my children and grandchildren live being called family members of a murder,” he was quoted as saying.
Court officials couldn’t immediately confirm Lee’s comments but said the court is expected to issue its ruling on him and the 14 other crew members next month.
Asked by prosecutors in court whether he issued an evacuation order to passengers, Lee said he definitely did so, according to Yonhap.
Many survivors have said they were repeatedly ordered by loudspeaker to stay on the sinking ship and they didn’t remember any evacuation order being given before they helped each other flee the vessel.
About six months after the sinking, 294 bodies have been recovered but 10 others are still missing. Most of the dead were high school students who were travelling to a resort island for a school trip. AP