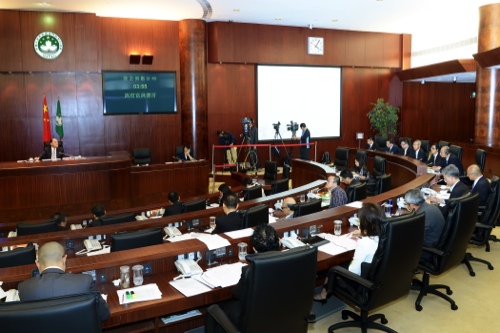 As Macau’s financial reserves reached over MOP249.1 billion last April, Legislative Assembly lawmakers demanded further measures to increase the returns on investment, as well as more transparency from the Monetary Authority of Macau (AMCM) when providing information on the current financial reserve.
During yesterday’s Legislative Assembly (AL) plenary session, AMCM’s president said that the institution has adopted a more cautious attitude to financial investments. Nevertheless, Anselmo Teng said that they were willing to accept suggestions provided recently by the International Monetary Fund (IMF), including the establishment of a sovereign wealth fund. He also didn’t rule out the possibility of creating a company to manage public funds.
“[Even with] the impact of the financial crisis in 2008, our financial reserve has had positive indices (…) We have had countries and regions that have had a positive experience as reference, and we’ve opted for tools providing fluidity rather than oscillations,” he said.
Throughout an oral inquiry, lawmaker Si Ka Lon voiced his concerns over current management of the financial reserves, stating that strategies on current investments are not likely to contribute to greater diversification of Macau’s economy.
Moreover, he stressed that, although there are risks in investing, these cannot be seen as an excuse “to not work.” Si Ka Long suggested that the government should adopt preventative measures instead and resort to a risk management scheme.
He recalled that the Secretary for Economy and Finance, Mr Francis Tam, had considered the establishment of an enterprise managing public funds, but, until now, the government hasn’t given any updates about such a measure.
The AMCM president did not rule out the possibility of creating such an enterprise. But he stated that establishing it would imply a revision of the law. “It is nonetheless still viable,” he reiterated.
As he had hinted before, the idea of creating a sovereign wealth fund – as suggested in the IMF’s latest report – is another option on the table.
“If the government decides to create a sovereign fund, our attitude [toward the idea] is positive. There are several options and the one suggested by lawmaker Si Ka Lon is also one of them,” he said, while replying to legislators’ enquiries.
Again, he said that the fund could be created independently from the financial reserve, as otherwise legislation regulating Macau’s financial reserves would have to be revised.
But lawmakers raised criticism over AMCM’s approach to investments. They believe that, although Macau has a good financial reserve, returns on investment haven’t paid off as much as they should.
Angela Leong said that AMCM lacks courage and urged the institution to find “talented young people to work on the investment of funds.”
Zheng Anting recognized that Macau has a great financial reserve, but questioned government officials on the best way to apply public funds. He suggested investments in the western part of Guangdong province. “AMCM needs to have a plan. We are in the Pearl River Delta and, for instance, the west part of Guangdong still needs to be developed,” he said.
Ho Ion Sang also stated that, with such a large financial reserve, more strategies are needed: “We should see which countries could be more advantageous to invest in. We have a lot of managers working within banks and they know how to invest. Could AMCM [recruit] talented people, as its responsibility is greater?”
On the other hand, Ng Kuok Cheong suggested that the Macau government should invest further in shares: “Even if you do not establish an enterprise to manage public funds, I think it would be best to acquire more shares.” However, he did say that the next Secretary for Economy and Finance should address issues concerning the financial reserve after the Chief Executive election in August.
“From what I have heard, I think that with the future government and the next Secretary – if they have more knowledge of the economy – we will have further ideas,” he said, adding that investing in the real estate market is another option that should be considered.

The government is revising public procurement legislation regulating the acquisition of goods and services, the director of the Financial Services Bureau, Ms Vitória Maria da Conceição, revealed yesterday. The government is hoping to present a draft within the year, to be later submitted for public consultation.
In an oral inquiry, lawmaker Mak Soi Kun pointed out that current legislation on the acquisition of goods and services dates back to the 1980s, whereas other countries have been adjusting similar laws to integrate legal bodies that have been set up to fight corruption.
“If legislation is not revised or if a new law is not drafted, this can easily lead to corruption, while good use of public money remains to be ensured,” he said.
Lawmaker Zheng Anting holds a similar opinion. He stressed that there is a need to legislate on public procurement as soon as possible, to avoid exceeding budgets in projects such as the LRT and on the Pac On ferry terminal.
Legislators voiced their concerns regarding the need to amend out of date legislation , especially to ensure the proper use of public money.