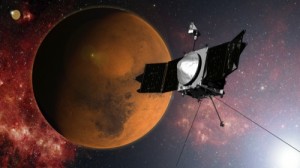 In this artist concept provided by NASA, the MAVEN spacecraft approaches Mars on a mission to study its upper atmosphere

NASA’s Maven spacecraft arrived at Mars late Sunday (yesterday) after a 711 million kilometer journey that began nearly a year ago.
The robotic explorer fired its brakes and successfully slipped into orbit around the red planet, officials confirmed.
“This is such an incredible night,” said John Grunsfeld, NASA’s chief for science missions.
Now the real work begins for the USD671 million mission, the first dedicated to studying Mars’ upper atmosphere.
Flight controllers in Colorado will spend the next six weeks adjusting Maven’s altitude and checking its science instruments. Then Maven will start probing the upper atmosphere of Mars. The spacecraft will conduct its observations from orbit; it’s not meant to land.
Scientists believe the Martian atmosphere holds clues as to how Earth’s neighbor went from being warm and wet billions of years ago to cold and dry. That early wet world may have harbored microbial life, a tantalizing question yet to be answered.
NASA launched Maven last November from Cape Canaveral, the 10th U.S. mission sent to orbit the red planet. Three earlier ones failed, and until the official word came of success late Sunday night, the entire team was on edge.
“I don’t have any fingernails any more, but we’ve made it,” said Colleen Hartman, deputy director for science at Goddard Space Flight Center in Greenbelt, Maryland. “It’s incredible.”
The spacecraft was clocking more than 16,000 kph when it hit the brakes for the so-called orbital insertion, a half-hour process. The world had to wait 12 minutes to learn the outcome, once it occurred, because of the lag in spacecraft signals given the 222 million kilometers between the two planets on Sunday.
“Based on observed navigation data, congratulations, Maven is now in Mars orbit,” came the official announcement. Flight controllers applauded the news and shook hands; laughter filled the previously tense-filled room.
Maven joins three spacecraft already circling Mars, two American and one European. And the traffic jam isn’t over: India’s first interplanetary probe, Mangalyaan, will reach Mars in two days and also aim for orbit.
Maven’s chief investigator, Bruce Jakosky of the University of Colorado’s Laboratory for Atmospheric and Space Physics in Boulder, hopes to learn where all the water on Mars went, along with the carbon dioxide that once comprised an atmosphere thick enough to hold moist clouds.
The gases may have been stripped away by the sun early in Mars’ existence, escaping into the upper atmosphere and out into space. Maven’s observations should be able to extrapolate back in time, Jakosky said.
Maven — short for Mars Atmosphere and Volatile Evolution Mission — will spend at least a year collecting data. That’s a full Earth year, half a Martian one. Its orbit will dip as low as 125 million kilometers above the Martian surface as its eight instruments make measurements. The craft is as long as a school bus, from solar wingtip to tip, and as hefty as a sports utility vehicle. Marcia Dunn, Aerospace Writer, Cape Canaveral AP