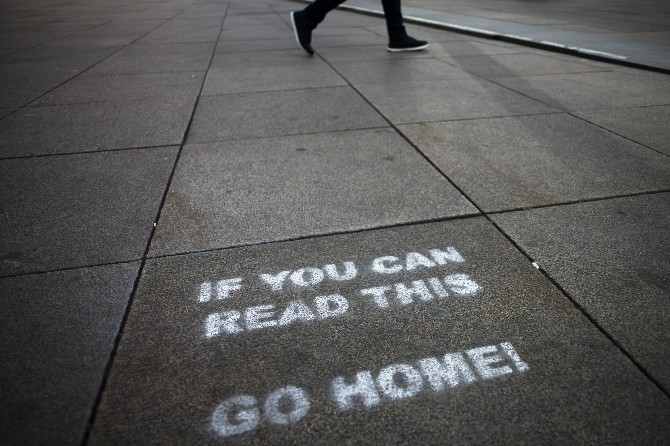 In an abrupt turnaround, President Donald Trump extended lockdown measures across the United States as deaths in New York from the new coronavirus passed 1,000. Spain yesterday became the third country to surpass China in infections after the United States and Italy.
With a population of only 47 million to China’s 1.4 billion, Spain’s tally of infections reached 85,195, an 8% rise from the previous day. Spain also reported 812 new deaths, raising its overall virus death toll to 7,300.
The health systems in Italy and Spain have been crumbling under the weight of caring for so many desperately ill patients at once. The two nations have more than half the world’s 34,600 deaths from the virus that has upended the lives of billions of people and devastated world economies.
At least six of Spain’s 17 regions were at their limit of ICU beds and three more were close to it, authorities said, while crews of workers are frantically building more field hospitals. In hard-hit Madrid, flags were hoisted at half staff for an official mourning period.
Even as the rate of new infections slows in Spain, Dr. Maria José Sierra said there’s no end to the restrictions in sight yet.
“Reducing the pressure on the ICUs will be important for considering de-escalation measures,” said Sierra, who took over as the health emergency center’s spokesperson after its director, Fernando Simón, tested positive.
In a situation unimaginable only a month ago, Italian officials were cheered when they reported only 756 deaths in one day.
‘’We are saving lives by staying at home, by maintaining social distance, by traveling less and by closing schools,” Dr. Luca Richeldi, a lung specialist, told reporters.
In a stark reversal of his previous stance, Trump extended federal guidelines recommending that Americans stay home for another 30 days until the end of April to slow the spread of the virus. The turnabout came after Dr. Anthony Fauci, director of the National Institute of Allergy and Infectious Diseases, said up to 200,000 Americans could die and millions become infected if lockdowns and social distancing did not continue.
“We want to make sure that we don’t prematurely think we’re doing so great,” Fauci said.
The U.S. now has more than 143,000 infections and 2,500 deaths, according to Johns Hopkins University, while around the world 732,000 people are infected. The true number of cases is thought to be considerably higher because of testing shortages and mild illnesses that have gone unreported.
Moscow went on its own lockdown yesterday as all of Russia braced for sweeping nationwide restrictions. The Russian capital of 13 million accounts for more than 1,000 of the country’s 1,836 coronavirus cases.
“The extremely negative turn of events we are seeing in the largest European and U.S. cities causes extreme concern about the life and health of our citizens,” Moscow Mayor Sergei Sobyanin said.
An electronic monitoring system will be used to control residents’ compliance with the lockdown, he said.
In Italy, which has by far the most deaths from the virus worldwide, officials expressed cautious optimism that the drastic measures they have taken to keep people apart are having an impact.
Italy has reported 97,689 infections and 10,779 deaths, but said the number of positive cases in the last day increased just 5.4%, and the number of deaths have dropped about 10% a day since Friday.
Experts say the critical situations seen in hospitals in Italy and Spain will be soon heading toward the United States.
Coronavirus patient Andrea Napoli, 33, told The Associated Press he didn’t remotely expect that he would be hospitalized, struggling for his life, since he was young and fit. But what he saw at a Rome hospital shocked him.
While he was being treated, three patients died in his ward. He saw doctors stressed and exhausted from the long hours, out of breath from pushing equipment around, dressed in protective masks, suits and gloves.
‘’What I saw was a lot, a lot of pain. It was very hard,’’ Napoli said. ‘’I heard screams from the other rooms, constant coughing from the other rooms.’’
China’s National Health Commission yesterday reported 31 new COVID-19 cases, among them just one domestic infection. At the peak of China’s restrictions, some 700 million people were ordered to stay home, but those rules are easing.
New York state remained the epicenter of the U.S. outbreak, with the vast majority of the deaths in New York City. But infections were spiking not only in cities but in Midwestern towns and Rocky Mountain ski havens. West Virginia reported its first death, leaving only two states — Hawaii and Wyoming — with none linked to COVID-19.
The virus is moving fast through nursing homes, assisted living facilities and other places for vulnerable people, spreading “like fire through dry grass,” New York Gov. Andrew Cuomo said.
Britain’s National Health Service said EasyJet and Virgin Atlantic were writing to cabin crew who have been laid off — especially those with first aid training — to ask if they would work in makeshift hospitals under the supervision of doctors and nurses.
Britain’s political elite have been hit hard by the coronavirus pandemic, with the country’s prime minister, health minister, chief English medical director and Brexit negotiator all testing positive and in isolation, as well as the heir to the throne, Prince Charles.
Cases across Africa rose close to 5,000 in 46 countries. Zimbabwe began a three-week lockdown and more cities across the continent were shut down. ARITZ PARRA, VLADIMIR ISACHENKOV, DAVID RISING, AP