SPECIAL FEATURE: The show is on, let’s SOHO! 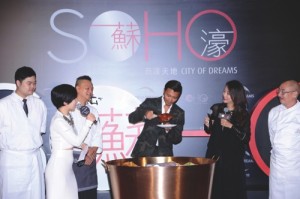 Yesterday saw one of the most exciting openings in Macau this year, with international celebrities and artists gathering in SOHO at the City of Dreams to witness the official opening of the new dining and entertainment district.
Dedicated to elevating Macau into becoming an international entertainment hub, City of Dreams invited Asian superstar and renowned food lover Nicholas Tse and his celebrity manager and show producer Mani Fok, as well as the prominent international street artist D*Face, to officiate the grand opening ceremony.
Nic Tse, whose food and cooking show has captured the hearts and stomachs of many, is well known for his constant search for outstanding food and great recipes – alongside his manager Mani Fok – to share among friends.
Before the opening of SOHO, Nic already thought highly of the dining experience at City of Dreams, which showed from his praise of Jade Dragon – the complex’s Chinese restaurant. “After tasting the first dish [in Jade Dragon], I asked: how can it be this different [from other restaurants]?” 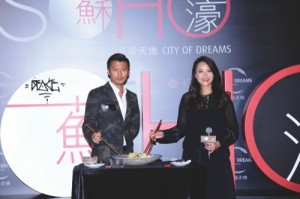 Nic and Mani show off their admirable culinary skills, creating a special dish to celebrate the opening of SOHO

Nic said he later visited the kitchen and found out how dedicated the chef and staff were.
His manager Mani added that it is very rare for Nic Tse to praise any restaurants.
Always trying to come up with new ideas for their show “Chef Nic”, Nic and Mani suggested that SOHO could make the perfect setting for their program due to the diversity of cuisines showcased, which could save them “the hassle of traveling around different countries”.
“I think it is really great and rare that [SOHO at City of Dreams] can gather so many different cuisines. I believe it suits all types of people with different tastes”, Mani said.
Moreover, Nic stated that it is very unusual for him to attend an opening ceremony. “If I don’t believe in [the place], I would not attend [its opening ceremony].”
A vote of confidence it is. 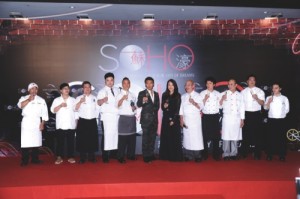 Nic, Mani and master chefs from SOHO restaurants toast the grand opening of SOHO at City of Dreams Macau

The superstar also revealed that he “had high anticipations for the opening of SOHO” when shooting his travelogue at City of Dreams Macau in May. “I’m delighted to come back to see the seamless merge between global culinary cultures, state-of-the-art entertainment and street art here in SOHO”, Nic said.
The celebrity added that he is certain SOHO will become “the leading social hub in Macau”.
In fact, Nic is even considering opening his own restaurant, and some have suggested he open the first one in SOHO.
Another VIP who attended yesterday’s ceremony was artist D*Face, who created a set of two large murals as well as some graffiti for the venue.
The artist said he is privileged to have travelled the world and painted large scale murals in different cities, including London and New York, which each boast cultural districts called ‘Soho’.
“I believe [SOHO at City of Dreams] will open up a new chapter in Macau’s street art development”, he stated.
D*Face’s pieces, alongside those created by other artists, can be found on different walls of the 35,000 square foot SOHO, which features over 10 restaurants that serve customers tantalizing cuisines from countries and regions such as Taiwan, Japan, Korea, Italy, Mexico, the United States, South Asia and Hong Kong.
Some of the restaurants featured are also recognized worldwide. They include the Taiwanese dumpling chain Din Tai Fung, which opened its 100th shop at SOHO, as well as Chan Kee 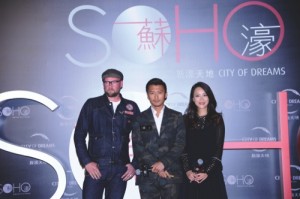 Roasted Duck, the first overseas branch of the Sham Tseng Hometown of Roasted Goose in Hong Kong. The delicate xiaolongbao of the former and the crispy roasted goose of the latter promise to draw in a large crowd.
Talking about a perfect evening of dining and entertainment, one cannot forget SOHO’s bars.
There are a variety of watering holes that guests can choose from, providing patrons with different entertainment options spanning live music in the Hard Rock Café to live football matches on mega screens in the 777 Sports Bar.
Diners can also visit the Shelter Italian Bar and Restaurant for wine and beer, or the El Pinball Mexican Restaurant that gives its patrons great dishes and drinks, as well as a selection of interesting bar games.
Besides an exciting dining and entertainment experience, a visit to SOHO is also a trip to the world of hip and chic. 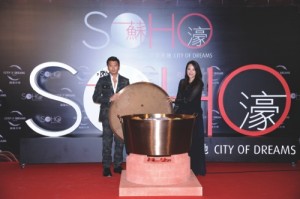 SOHO presents its guests with street performances from dancers, comedians, magicians and street musicians, all of whom are exceptionally talented.
In addition, visitors will also be fascinated by the cutting edge technology that has been employed to show that “SOHO inherits the wow-DNA from City of Dreams”.
The first and most eye-catching installation is a gigantic interactive digital wall that offers personalized greetings to every visitor to the dining and entertainment district.
City of Dreams has also installed in SOHO the first “musion” screen in Macau and Hong Kong, which promises to bring visitors astounding visual effects with the world’s leading 3D holographic technology.
“Audiences will be able to see 3D performances that make it almost impossible to distinguish between virtual and reality”, states a press release.
Not to mention the largest electromagnetic flip-dot screen that is also situated inside that mimics the flip boards found at the airport. The interaction with it alone is enough to leave visitors impressed.