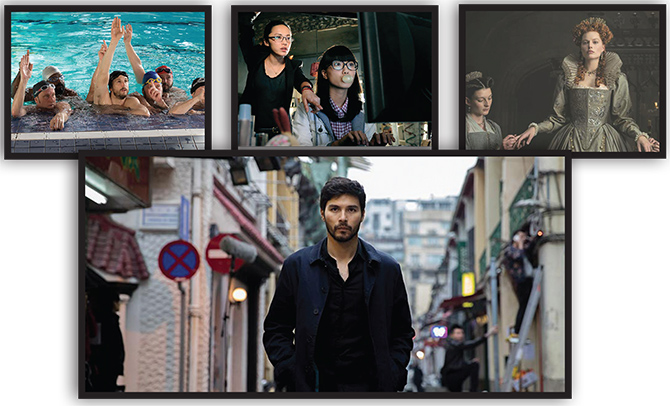 This year’s line-up includes “Sink or Swim” by French director Gilles Lelouche, a comedy about the formation of a male synchronized swimming team; “Caught in the Web” by IFFAM’s own Chen Kaige, a thrilling drama selected as the Chinese entry for the Best Foreign Language Oscar; “Journey to the West: The Demons Strike Back” directed by Tsui Hark; and “212 Warrior” by Indonesian director Angga Dwimas Sasongko.

Representing Macau as a special presentation is “Empire Hotel,” a thriller set in one of Macau’s most traditional neighborhoods by acclaimed Portuguese director Ivo M. Ferreira.

Shanghai International Film Festival highlighted as their special presentation “Lost, Found”, a Chinese drama directed by Lü Yue, which revolves around a mother’s search for her missing child and her discovery of the truth about the family’s nanny.

“Mary Queen of Scots” is Hollywood’s presentation in this category. Directed by Josie Rourke, this highly anticipated film tells the story of the conflict between Queen Elizabeth I, portrayed by Margot Robbie, and her cousin Mary Stuart played by Golden Globe winner Saoirse Ronan.

The IFFAM Industry Hub is a three-day event where new professionals of the film industry get the opportunity to network with established directors and financiers. The gathering aims to promote discussions about movie making and serves as an initial encounter for new partnerships to be developed. Hosted at the Macao Cultural Centre, the main focus of the event is the IFFAM Project Market (IPM), where 14 filmmakers introduce their movie projects with hopes of bringing them to life.

Only in its third year, the IPM has proven to be a success as a vast number of movies pitched in the previous two years are now in production, including “The Long Walk” directed by Mattie Do, “The Price of Tea” directed by Richie Mehta and “River Town” directed by Lu Chuan.

This year’s lineup includes two local projects – Tracy Choi’s “Lost Paradise” and Chao Koi Wang’s “Wonderland” – in the midst of a truly international selection with features from Argentina, Canada, the UK, the USA and more. The IPM awards ceremony will take place on the evening of the third day.

On the second day of the Industry Hub is the Macao Forum, an afternoon where professionals of various backgrounds and cultures exchange ideas and insights on the film industry. Although attendance in the afternoon is only possible by invitation, the general public is invited to be present for the Public Presentation where conclusions from the talks are shared. A new addition to this year’s program is the Work-in-
Progress presentations.

The WIP serves as a way to secure funds for projects that are already in the production stage. This inaugural program aims to help relatively new filmmakers meet with distribution agents so that opportunities might come about. This enhances IFFAM’s mission of prioritizing new industry potential. The 2018 Industry Hub runs from December 9 to 11.

Q   WHO IS PART OF THE IFFAM COMMITTEE?

Q   WHO ARE THE TALENT AMBASSADORS?

A    For this year’s IFFAM, there are three talent ambassadors. Each comes from a different cultural background to ensure the IFFAM’s mission of joining together industry professionals from all around the world. Nicolas Cage, the Academy-Award winning actor, director and producer; Aaron Kwok, a Hong Kong-born actor, singer and dancer who was named Asia Pacific’s most popular artist and awarded with the Hong Kong Dancer of the Year by the Hong Kong Dance Federation. Lim Yoon A (a.k.a Yoona) is the last talent ambassador. The Korean singer is one of the most popular artists in Asia.

Q   WHEN WILL TALENT AMBASSADOR NICOLAS CAGE BE PRESENT?

A Nicolas Cage, one of IFFAM’s talent ambassadors will be present at the inaugural ceremony on December 8 as well as on December 9 where he will give a Masterclass. This event will be held at the Wynn Macao Grand Ballroom from 3p.m. until 4p.m. Here, Cage will talk about his over four-decade-long career while discussing groundbreaking classics and mega-budget blockbusters. Mike Goodridge, the festival’s Artistic Director, will moderate. Tickets are available for sale at the Macau Retail Sales Counter on a first come, first serve basis, keeping in mind that each person is limited to two tickets.