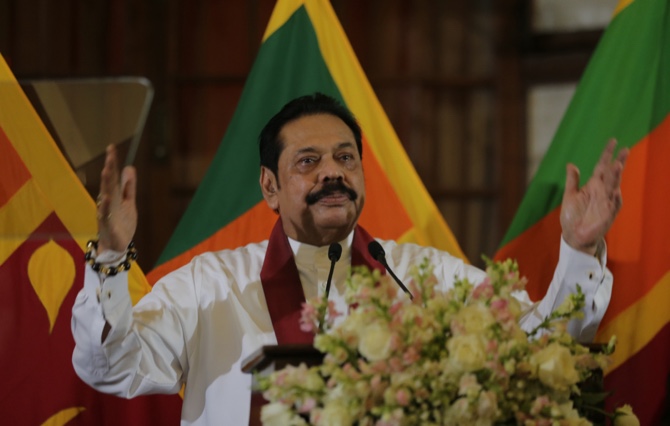 Sri Lanka’s president has summoned Parliament to meet next week as pressure grows for him to resolve the turmoil set off when he sacked the Cabinet last week, his chosen prime minister said yesterday.

President Maithripala Sirisena made the decision a day after meeting with Parliament Speaker Karu Jayasuriya, who previously warned of possible violence if lawmakers were not summoned immediately.

On Friday, Sirisena had dismissed Prime Minister Ranil Wickremesinghe and his Cabinet, later telling reporters he acted in part because Wickremesinghe and a Cabinet colleague were behind an alleged assassination plot against him. Details of the alleged plot have not been disclosed and Wickremesinghe denies the accusation.

Sirisena had replaced him with former strongman Mahinda Rajapaksa and suspended Parliament until Nov. 16 in an apparent attempt to give Rajapaksa time to muster enough support to survive any no-confidence vote.

Wickremesinghe had demanded the convening of Parliament, saying he still controls a majority of lawmakers.

Sirisena’s moves have triggered a power struggle and some observers call it a constitutional crisis.

In remarks broadcast on state television, Rajapaksa told a meeting at his office that Sirisena decided to summon Parliament on Nov. 5.

Karu Paranavithana, a lawmaker from Wickremesinghe’s United National Front, welcomed the announcement, calling it “a great victory” for the people.

He said Sirisena’s coalition tried to establish a dictatorship but failed. “They will have to retreat now,” he said.

Wickremensinghe tweeted saying “the people’s voices have been heard. Parliament will be reconvened on the 5th of November. Democracy will prevail.”

Sirisena was under increasing pressure by his political opponents, rights groups and foreign governments including the United States to summon Parliament and end the crisis.

Sirisena’s supporters have talked for weeks about an alleged assassination plot, but Sunday was the first time Sirisena commented publicly about it. A police informant has said Wickremesinghe and a Cabinet member, former army commander Sarath Fonseka, were behind it. Police have made no arrests.

Tensions have been building between Sirisena and Wickremesinghe for some time, as the president did not approve of economic reforms introduced by the prime minister. Sirisena was also critical of investigations into military personnel accused of human rights violations during Sri Lanka’s long civil war, which ended in 2009.

A shooting at the Petroleum Ministry on Saturday killed two people and wounded one in the first violence related to the turmoil. On Tuesday, thousands of Sri Lankans protested in the capital demanding Sirisena immediately convene Parliament. Bharatha Mallawarachi, Sri Colombo, AP