SSM: Jabs to participate in events not compulsory, yet 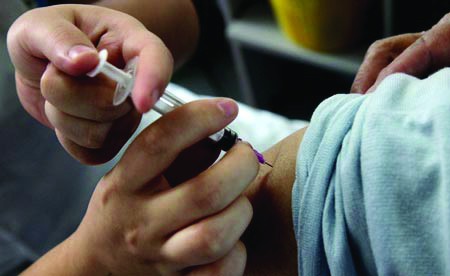 The recently-discussed measure requiring for the mandatory vaccination of all participants with at least one dose of the Covid-19 vaccine in order to attend certain events in Macau, is a temporary measure and not yet a general rule, health authorities said yesterday during the daily briefing from the Novel Coronavirus Response and Coordination Center.

Dr. Leong Iek Hou, coordinator of the Center for Disease Control and Prevention, clarified that the proposed measure, which would apply to all participants in the affected events (including media outlet staff members), has been flagged by health authorities and discussed by several government departments. However, the measure currently represents the individual opinions of the health authorities in response to specific information requests from event organizers. Further, the advice is directly related to the current pandemic situation in Macau.

“There were several [government] services that recently requested our opinions [on the measures that would be enforced at events],” said Leong.

“In Macau, due to the pandemic situation, our approach for events that have a lot of attendees is always to first limit the number of participants to only the essential ones. Then [we ensure that] those people have had at least one dose of a Covid-19 vaccine, and finally, that they should possess a negative nucleic acid test (NAT) result within a period of 48 hours,” he added.

These measures are related to the recent outbreak in the community and because the city is still in the 14-day period that is considered at higher risk of community contagion.

“This is a critical phase since 14 days have not yet passed since the outbreak, and this is why we are adopting these measures to reduce the probability of infection,” Leong clarified.

So far, the events already set to adopt the new measures include the swearing-in ceremony of the new members of the Legislative Assembly on October 16 and the opening of the judiciary year on October 20.

The health authorities’ decision has attracted criticism, with many people – particularly those working in media outlets – claiming that it is a veiled attempt to force people to get vaccinated. Critics have observed that this would be in opposition to the principle stated on many occasions by the authorities, as well as by the Chief Executive, that vaccination is a personal and individual decision and not mandatory.

In the press briefing, several media representatives protested against the measure, claiming that was a form of “restricting media work,” a claim that did not elicit a response from the government.