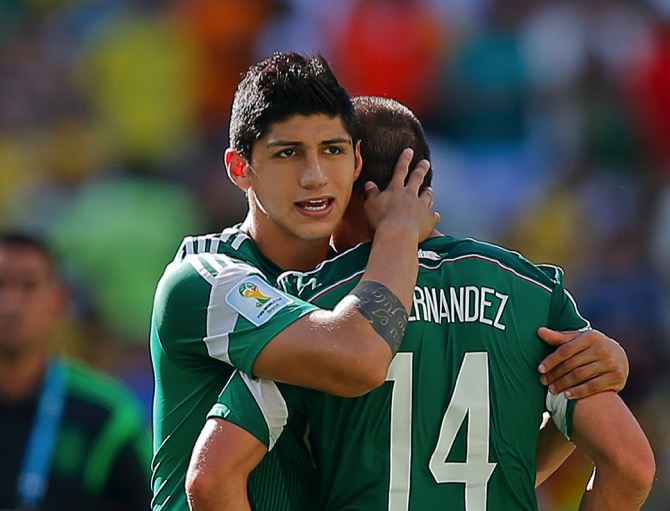 Caught in a real-life win-or-lose challenge, football forward Alan Pulido overpowered a kidnapper, freed himself and then called police for help — a dramatic tale that shows how tough the professional player is, or how incompetent his abductors were.
One thing the story does show is how dangerous Pulido’s home state of Tamaulipas is. Stretching south from Mexico’s border with southern Texas, Tamaulipas has long been plagued by warring drug cartels and ineffectual police.
Indeed, Pulido’s biggest worry was that police officers sent to his rescue might shoot him.
“He is asking that we tell the police that the caller is alone, with the kidnapper, don’t confuse him with the kidnapper,” according to a police report describing his 911 call obtained by The Associated Press. “They are shooting into the house, don’t get him by accident.”
Pulido had been abducted late Saturday by four gunmen who were demanding USD325,000 or 6 million pesos ransom, then about 24 hours later he found himself alone with one of his captors and saw his chance. Listed at 5-foot-9 and about 150 pounds, Pulido wrestled away the man’s pistol, beat him into submission and used his cellphone to call Mexico’s emergency number.
The 25-year-old, who is a forward for Olympiakos in the Greek league and has played for Mexico’s national team, was in a locked house and didn’t know where he was in the Tamaulipas capital city, Ciudad Victoria. So he threatened and beat his captor while on the phone, demanding to be told where they were.
During his first call, Pulido peered out of a window and described the white two-story house with two cars, grey and red, parked in front.
In the next call, Pulido told the operator that state police had arrived outside. The operator told him to fire the pistol so they would know they were in the right spot, but Pulido said he had no bullets. He said police themselves were starting to shoot and described his shorts and tank top so they wouldn’t confuse him with the now-unconscious captor.
Once police arrived, Pulido made a third call to confirm with the operator that they were trustworthy.
Tamaulipas state Attorney General Ismael Quintanilla said at a news conference that emergency services received Pulido’s call for help early Monday due to “a careless act by his captors.”
It all sounded a bit suspicious to security analyst Alejandro Hope in Mexico City.
“One of two things: Either Alan Pulido was the victim of the most incompetent kidnappers in the world, or there’s something they don’t want to reveal,” Hope wrote. “Pulido’s kidnappers were so stupid they didn’t blindfold him, tie his hands or take his cellphone away.”
The abductors grabbed Pulido as he was returning from a party about 11:30 p.m. Saturday. His girlfriend was not taken and alerted others. Pulido’s family received the first ransom call around 1:30 p.m. Sunday and a second one a short time later, Quintanilla said.
His brother, Armando Pulido, who also played professional soccer in Greece, said Tuesday on Imagen Radio that he was negotiating with kidnappers following his brother’s abduction.
He said he knew they had his brother when they answered a question only Alan would know.
After 11 p.m. on Sunday, he told the kidnappers to give him until the following afternoon to gather money for ransom. He told them the 6 million pesos they demanded was impossible. They answered that his brother would be dead by then.
Minutes later, the anti-kidnapping unit informed him that Alan had escaped.
“We’ve always gone around very relaxed, without security, without anything, and for that reason, the truth is we could never imagine, we never imagined something of this magnitude,” Armando Pulido said.
Tamaulipas has been plagued with violence in recent years as the Gulf and Zetas drug cartels battle for control. Both organizations also are involved in theft, extortion and kidnappings.
According to government statistics, 41 kidnappings were reported in the state in the first four months of this year compared to 78 during the same period last year. The actual number is believed to be much higher since most people do not report kidnappings to authorities.
Tamaulipas listed 179 homicides from January through April, compared to 211 during the same period last year. Alfredo Pena, Ciudad Victoria, AP