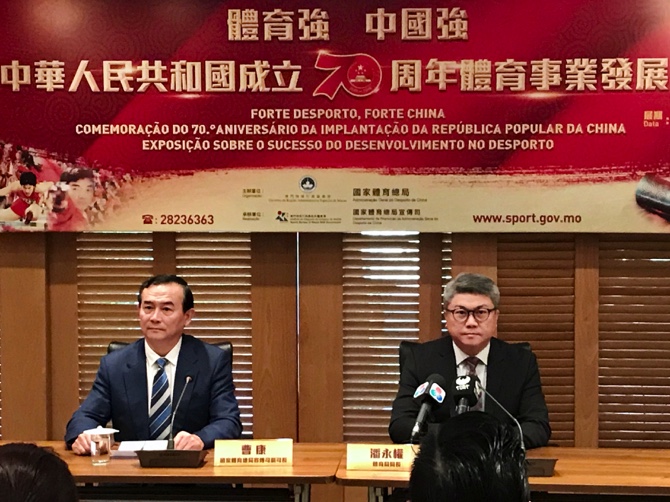 The exhibition “Strong Sport, Strong China,” which will display the development of sports in China over the past 70 years, opens today, the Sports Bureau (ID) announced last week during a press conference.

The exhibition, an initiative of the General Administration of Sport of China in cooperation with ID, highlights a series of sports achievements by the People’s Republic of China under the leadership of the Communist Party, and will be on display until December 8 in the Entry Hall of the Tap Seac Multisport Pavilion.

During the press conference announcing the opening, ID president Pun Weng Kun said that the purpose of the exhibition was to “present to the general population the history of sports in the country, [so they may] learn of the development of sports in China over the past 70 years and, at the same time, look back on the results of Macau sports over the 20 years after the establishment of the Macau Special Administrative Region.”

The display features both old and recent photographs, as well as objects that show the development of sports in China over the period, including trophies, medals, sports equipment and uniforms.

The exhibition is divided into six different themes: party leadership, the hoisted national flag, the sporting spirit, leisure sports, sports diplomacy and the country’s strengthening through sports. The section dedicated to Macau will display results from both local competitive sports and the government’s sports-
for-all initiatives.

This is the second time this type of exhibition is being held. The first one was held last August in the city of Tai Yuan in Shanxi province during the 2nd China National Youth Games.

A reservation is required to visit the exhibition. Group bookings will be taken for a minimum of 20 and a maximum of 50 people, who will be offered a guided tour of the exhibition. Tours will be held in Mandarin only.