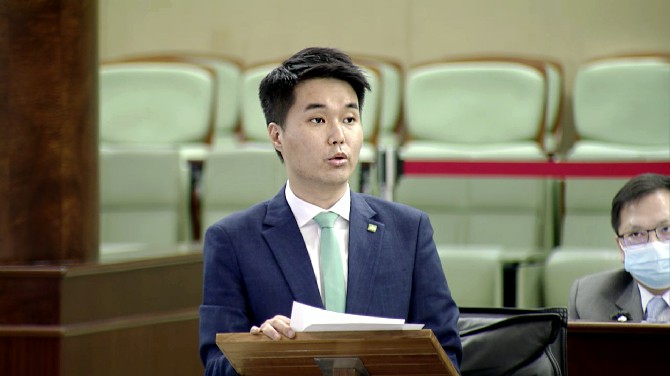 Away from the exchange of arguments between pro-democracy and pro-establishment lawmakers over disqualifications for the elections, lawmaker Sulu Sou choose to use the period before the agenda to present his farewell speech.
Sou recalled several moments from his term, from election day to the present moment, including his mandate suspension.
“It is said that one day in politics is already too much, especially in this complex and constantly changing time. I want to make good use of all valuable opportunities. I would like to express my sincere thanks to all the members of the New Macau Association who, with selflessness, team spirit, assiduity, and maximum effort, created this [Sulu] Sou Ka Hou [and put it] in the spotlight, as well as to all those who have been following us with support, trust, oversight, and criticism,” he said. He added, “I’ve always felt as if I’m walking on thin ice in this place and sitting on a spiked rug.”
Still, he said he had taken the best he could from his time at the Legislative Assembly (AL): “making good use of the right to information at source; spreading news [usually] kept behind closed doors; taking advantage of procedures; striving to prevent or at least lessen the harm of certain proposed laws or policies in the public interest; reinforcing the population’s right to be heard; and bringing to the chamber the voices of disadvantaged groups and progressive issues, which had been overlooked.”
Sou expressed hope that by being elected and fulfilling his term, he will help to encourage more young people to have confidence in themselves and Macau.
“I believe that, because of me, society will change and even if these are slight changes, there will be nothing to regret,” he said. He noted that people never regret giving opportunities to young people, because they tend to look not only at short term but at things in the perspective of one or more generations.
He added that those who participate in political life must understand the philosophy of thinking about what they will leave behind when they take office, and value what is entrusted to them by the population despite uncertainty and pressure.
“I had the opportunity to strive for the good of this home that I value very much; to serve this land that I love so much; to be elected by the population as a legislator; and to walk side by side with the people of Macau regardless of the wind and rain. I believe these were […] the most beautiful moments of my life and a supreme honor for me,” Sou concluded.