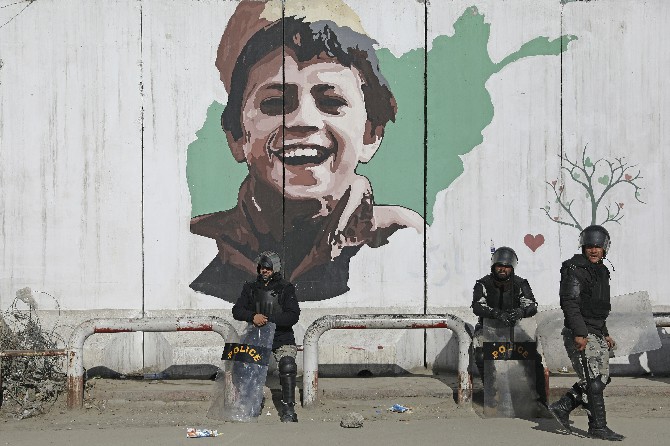 Afghan policemen in riot gear sit in front of a mural during a protest demonstration by supporters of Afghanistan’s leading presidential candidate, Abdullah Abdullah, in Kabul, last month

Afghans are increasingly fearful for their personal safety, but slightly more believe their war- weary country is moving in the right direction, compared to previous years, according to a new survey released yesterday.
The Asia Foundation poll found that 74.5% of respondents say they always, often or sometimes fear for their personal safety, an increase of over 3 percentage points from 2018.
“Increased optimism around the peace talks along with persistent fears about insecurity and the economy continue to influence Afghan views,” Abdullah Ahmadzai, The Asia Foundation’s country representative in Afghanistan was quoted as saying in the survey.
A total of 17,812 respondents aged 18 years and up were surveyed face-to-face across all 34 provinces from July 11, 2019 to Aug. 7, 2019, the San Francisco-based foundation said.
Optimism about the nation’s direction was at its highest in 2013 before declining to an all-time low in 2016 over concerns about the economy, difficult elections and the effects of radical reductions in foreign troops.
This year, 36.1% of respondents said the country is going in the right direction, up from 32.8% in 2017 and 2018, while 58.2% said the country is going in the wrong direction, down slightly from 61.3% in 2018.
One of the main drivers of the uptick in optimism is the number of respondents who cite “peace and end of war,” an increase from 16.4% in 2018 to 26.3% this year.
President Donald Trump, in his surprise Thanksgiving holiday visit to U.S. troops in Afghanistan last week, announced that the U.S. and Taliban have been engaged in peace talks and insisted the Taliban want to make a deal after heavy U.S. fire in recent months.
The trip came after Trump abruptly broke off peace talks with the Taliban in September, canceling a secret meeting with Taliban and Afghan leaders at the Camp David presidential retreat after a particularly deadly spate of violence, capped by a bombing in Kabul that killed 12 people, including an American soldier.
That ended a nearly yearlong effort by the U.S. to reach a political settlement with the Taliban.
It was not immediately clear how long or substantive the U.S. re-engagement with the Taliban has been.
Taliban spokesman Zabiullah Mujahid said the Taliban’s stance is unchanged. He said the United States broke off talks and when it wants to resume them, the Taliban are ready.
Following the collapse of peace talks and election delays, which took place after this year’s survey field work, prospects for a sustainable political settlement are unclear, Ahmadzai said.
“More than ever, empirical data is a crucial resource for the future and development of Afghanistan,” Ahmadzai added.
According to the foundation, peace talks and the long-delayed presidential election have been at the forefront of public discourse in Afghanistan this year.
Afghans’ stated belief that reconciliation with the Taliban might be possible has grown significantly more common since last year, with 64% of respondents saying it is possible, up from 53.5% in 2018 and 52.3% in 2017, when the question was first asked.
Yet, belief in reconciliation does not necessarily go hand in hand with optimism about the trajectory of the country.
Just last week, a leading Afghan presidential candidate, Abdullah Abdullah, organized protests over a recount in the September election that has been mired in accusations of fraud. Thousands of Abdullah’s supporters rallied Friday in the capital, Kabul, against what they said is the presence of fake ballots during a recount that seems set to favor the incumbent, President Ashraf Ghani.
Results of the Sept. 28 presidential polls have been repeatedly delayed amid accusations of misconduct and technical problems with counting ballots.
If no candidate obtains over 50% in the results, a second round of voting will be held.
Ghani and Abdullah head a fragile national unity government that was put together under U.S. pressure after both leaders claimed victory in Afghanistan’s last elections in 2014.
The study had a margin of error of plus or minus 1.16 percentage points. RAHIM FAIEZ, KABUL, AP