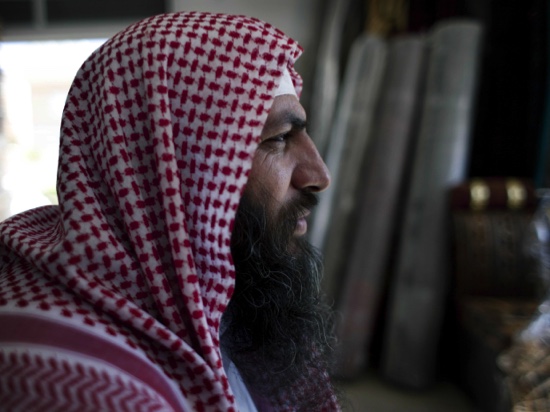 In a rare ground attack deep into Syria, U.S. Army commandos killed a man described as the Islamic State’s head of oil operations, captured his wife and rescued a woman whom American officials said was enslaved.
A team of Delta Force commandos slipped across the border from Iraq under cover of darkness Saturday aboard Black Hawk helicopters and V-22 Osprey aircraft, according to a U.S. defense official knowledgeable about details of the raid. The official was not authorized to discuss the operation publicly and spoke on condition of anonymity.
The Americans intended to capture a militant identified by U.S. officials as Abu Sayyaf. When they arrived at his location, a multi-story building, they met stiff resistance, the U.S. official said, and a firefight ensued, resulting in bullet-hole damage to the U.S. aircraft.
Abu Sayyaf was killed, along with an estimated dozen IS fighters, U.S. officials said. No American was killed or wounded.
Before the sun had risen, the commandos flew back to Iraq where Abu Sayyaf’s wife, Umm Sayyaf, was being questioned in U.S. custody, officials said. The goal was to gain intelligence about IS operations and any information about hostages, including American citizens, who were held by the group, according to Bernadette Meehan, spokeswoman for the U.S. National Security Council.
Abu Sayyaf was described by one official as the IS “emir of oil and gas,” although he also was targeted for his known association with the group’s leader, Abu Bakr al-Baghdadi.
U.S. officials said it was likely, given Abu Sayyaf’s position, that he knew about more than just the financial side of the group’s operations.
Despite the U.S. claims, much about the IS figure was in question. The name Abu Sayyaf has rarely been mentioned in Western reports about the extremist group and he is not known to be among terrorists for whom the U.S. has offered a bounty. The name was not known to counterterrorism officials who study IS and does not appear in reports compiled by think tanks and others examining the group’s hierarchy.
The U.S. official said Abu Sayyaf’s death probably has temporarily halted IS oil-revenue operations, critical to the group’s ability to carry out military operations in Syria and Iraq and to govern the population centers it controls.
But U.S. Rep. Adam Schiff, the top Democrat on the House Intelligence Committee, cautioned against exaggerating the long-term gain from killing Abu Sayyaf.
He said IS, like al-Qaida, “has proven adept at replacing its commanders and we will need to keep up the pressure on its leadership and financing.”
A U.S. Treasury official told Congress in October that IS militants were earning about USD1 million a day from black market oil sales alone, and getting several million dollars a month from wealthy donors, extortion rackets and other criminal activities, such as robbing banks. Kidnappings were another large source of cash.
U.S. airstrikes in Syria since September have frequently targeted IS oil-collection facilities in an effort to undermine the group’s finances. Robert Burns and Sarah El Deeb, Beirut , AP