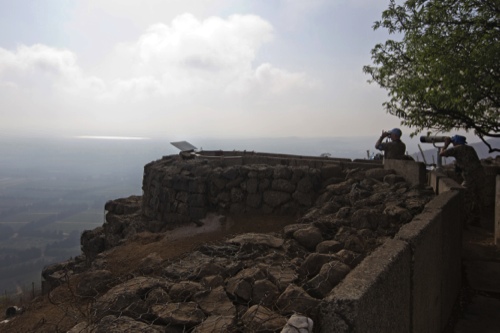 U.N. soldiers observe Syria’s Quneitra province at an observation point on Mount Bental in the Israeli-controlled Golan Heights, overlooking the border with Syria

Al-Qaida-linked Syrian rebels holding 45 Fijian peacekeepers hostage have issued a set of demands for their release, including the extremist group’s removal from a U.N. terrorist list and compensation for the killing of three of its fighters in a shootout with international troops, an official said yesterday.
The Nusra Front seized the Fijians on Thursday in the Golan Heights, where a 1,200-strong U.N. force monitors the buffer zone between Syria and Israel. The rebels also surrounded two Filipino units, but those U.N. troops escaped over the weekend.
Speaking in the Fijian capital of Suva, military commander Brig. Gen. Mosese Tikoitoga said the Nusra Front has made three demands for the peacekeepers’ release: to be taken off the U.N. terrorist list; the delivery of humanitarian aid to parts of the Syrian capital of Damascus; and payment for three of its fighters it says were killed in a shootout with U.N. officers.
Tikoitoga did not say whether the rebels’ demands would be seriously considered. He said the U.N. had sent hostage negotiators to Syria to take over discussions from military leaders.
“Negotiations have moved up to another level with the professional negotiators now in place,” he said.
Tikoitoga also released the names of the 45 detained soldiers, who he said are led by Captain Savenaca Siwatibau Rabuka. He asked Fiji’s community and church leaders to help look after the families of the captive troops and asked the public to also offer support.
“I appeal to all Fijians that while we pray for our soldiers in Syria that we be sensitive to the families,” he said, adding “the U.N. has assured us they will use all of their available resources for the safe return of our soldiers.”
Syrian rebels, including Nusra Front militants, seized a border crossing with Israel on the Syrian side of the Golan Heights last Wednesday. The area has been engulfed in heavy fighting between the opposition fighters and President Bashar Assad’s forces since then.
In Manila, Philippines, military chief of staff Gen. Gregorio Pio Catapang said the 40 Filipino peacekeepers who escaped had not accepted a rebel demand that they give up their firearms and surrender because that would have put the troops in grave danger.
Catapang said the rebel demands for the Fijians’ release showed their true nature.
“We don’t negotiate with terrorists,” he said. “We have machine guns and crew-served weapons so if we give them our weapons, this will help create an international problem.”
The Nusra Front, in a statement posted online Sunday, accused the U.N. of doing nothing to help the Syrian people since the uprising against President Bashar Assad began in March 2011. It said it seized the Fijians in retaliation for the U.N.’s ignoring “the daily shedding of the Muslims’ blood in Syria.” AP