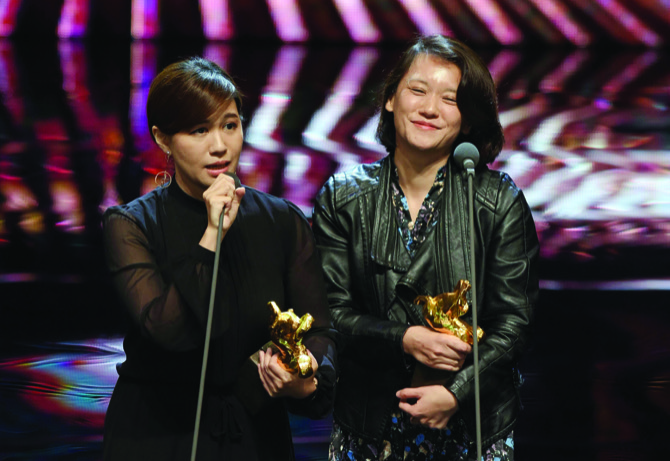 “We have never accepted the term ‘Chinese Taiwan,’” Tsai Ing-
wen said in a Facebook post. “Taiwan is just Taiwan.”

Director Fu Yue said during her acceptance speech Saturday in Taipei that her biggest hope was for “our country” to be regarded as an “independent entity.” Her film “Our Youth in Taiwan” won best documentary at the awards, which are akin to a Chinese-language Oscars.

Taiwan split from mainland China amid civil war in 1949, but Beijing considers the self-ruled island part of its territory.

In recent years, the ruling Communist Party has ratcheted up pressure on other countries to cut diplomatic ties with Taiwan — a prerequisite for establishing formal relations with China. Only 17 mainly small, developing countries still recognize Taiwan as a sovereign nation.

Chinese lambasted Fu on the Twitter-like Weibo platform following her win, sharing posts under the hashtag “Not one speck of China can go missing” and a map of China that includes Taiwan and territories it claims in the South China Sea.

The hashtag was used by high-profile actress Fan Bingbing, who disappeared from public life for months this year before being convicted on tax evasion charges in October.

Outraged online commenters also took to Fu’s personal Facebook page, which they littered with derogatory posts. Facebook is blocked in mainland China and can only be accessed through software that circumvents government filters known as the Great Firewall.

Tsai said in her post that the Golden Horse Awards, presented annually in Taipei, highlight the freedoms that set Taiwan apart from China.

“Here [in Taiwan] there aren’t people who will disappear or be silenced for expressing differing viewpoints,” she wrote, “and we also don’t have sensitive terms that are censored on the internet.”

China’s government cut ties with Tsai’s administration after her 2016 inauguration and has repeatedly denounced her for refusing its demand that Taiwan is a part of China.

“Our Youth in Taiwan” follows a young Taiwanese man and a young mainland Chinese woman who are at the center of student movements in Taiwan.

Lee appeared to anticipate the backlash to Fu’s speech, telling reporters after the ceremony, “I hope that no one will come to interfere [with the awards]. I hope that the Golden Horse Awards will remain very pure.”

“Please everyone respect the filmmakers,” he urged, according to Taiwan’s Central News Agency.

Entertainment industry figures in Taiwan and Hong Kong have routinely been blacklisted and had their work banned from mainland China after they expressed pro-independence or pro-democracy views. Yanan Wang, Beijing, AP

Chinese actress Fan Bingbing updated her Weibo timeline by re-tweeting a pro-China post from a state account, making her first mark on the social network since she published a letter of apology for tax evasion in early October. Fan shared the post over the weekend that was first published by The Communist Youth League of China, saying “China cannot miss out on any inch,” together with a map of China that includes Taiwan and the South China Sea. With more than 60 million followers on the Twitter-like Weibo, Fan had vanished between June and October from the press and on social media amid allegations she evaded taxes. Last month, Fan and companies she’s affiliated with were ordered to pay about 884 million yuan (USD127 million) in back taxes and fines, which is almost three times her 2017 income as estimated by Forbes magazine. Fan’s Weibo history shows more than 1,800 posts, though only the apology letter and retweet are currently visible to the public. Bloomberg