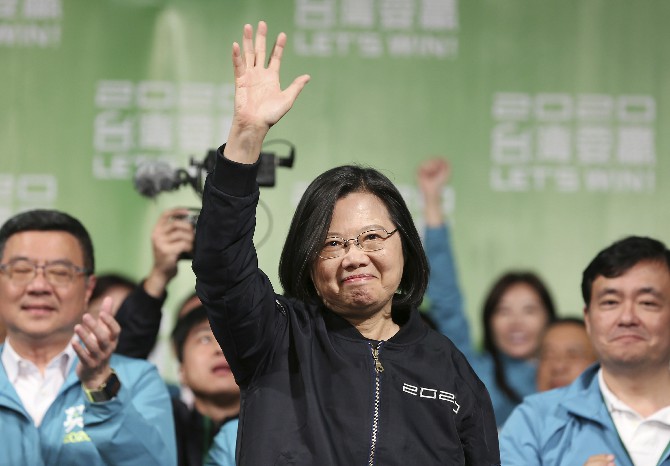 Taiwanese President Tsai Ing-wen urged China yesterday to release all information about the outbreak of a new virus and work with Taiwan on curbing its spread.
At China’s insistence, Taiwan is not a member of the World Health Organization and is not allowed to participate in any of its meetings. However, large numbers of Taiwanese travel to and live in China, where hundreds of people have been sickened and nine have died in an outbreak that apparently originated in the city of Wuhan.
Despite Beijing’s restrictions, the Taiwan Center for Disease Control said earlier this month it had been notified on Jan. 15 by its Chinese counterpart about the outbreak. It said it had also sent two experts to Wuhan to visit health care facilities in order to “better understand the treatment process of the cases.”
Tsai made no mention of those interactions at her news conference yesterday. Calls to her spokesman rang unanswered.
“I especially want to urge China, being a member of international society, that it should fulfill its responsibilities to make the situation of the outbreak transparent, and to share accurate information on the outbreak with Taiwan,” Tsai told reporters.
One case of the previously unknown coronavirus has been confirmed in Taiwan and others in Macao, South Korea, Japan, Thailand and the United States. The Taiwanese patient, a businesswoman who recently returned from Wuhan, is recovering, Tsai said.
Sharing information is also important for the health of the Chinese population and Beijing “should not put political concerns above the protection of its own people,” Tsai said.
China regards Taiwan as its own territory and says it is not entitled to representation in most international bodies.
“I want to reiterate that Taiwan is a member of international society. The 23 million people here, like all other people in every corner of the world, are facing threats to their own health,” Tsai said.
Taiwan, which was heavily affected by the 2002-2003 SARS outbreak that also originated in China, has enacted strict monitoring, detection and quarantine measures.
In Beijing, foreign ministry spokesman Geng Shuang said the Taiwanese experts had visited Wuhan at Taiwan’s request on Jan. 13-14 and held exchanges with Chinese colleagues.
“No one cares more about the health welfare of Taiwan compatriots than the Chinese central government,” Geng said at a daily briefing yesterday.
Chiu Chui-cheng, deputy minister of Taiwan’s Mainland Affairs Council, told The Associated Press that the visit was facilitated by an existing bilateral agreement covering medicine and public health.
“They dealt with issues related to the health and well-being of both countries’ people,” Chiu said. AP