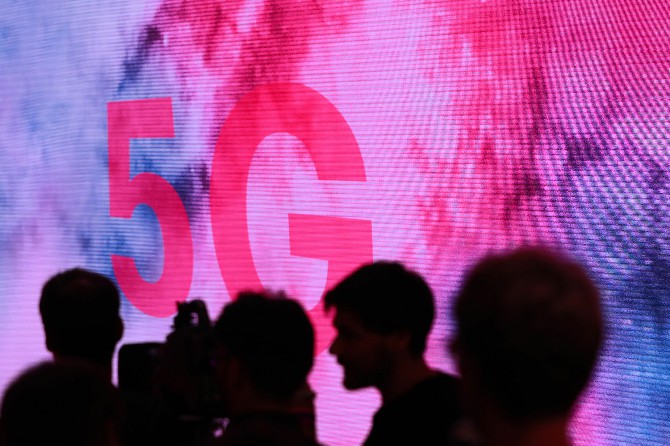 Bids in Taiwan’s auction of fifth-generation networking airwaves have exceeded NT$100 billion ($3.3 billion), a sign of robust demand as carriers race to deploy new wireless networks for applications including smart manufacturing and autonomous cars.
Chunghwa Telecom Co., Far EasTone Telecommunications Co., Taiwan Mobile Co. and two other rivals are bidding for preliminary licenses to the spectrum they need to operate their future 5G networks. Bidding continued yesterday after the total on Monday surpassed NT$100 billion, 98% of which was for rights to use the 3.5GHz band.
The rising costs for licenses shows carriers expect the faster networks — due later this year in Taiwan — will provide a market advantage over competitors. The auction results so far are “blowing away expectations,” New Street Research analysts said in a note dated Jan. 6.
“There is no sign that the bidding will end soon,” Sheih Chi-mau, chairman and chief executive officer of the island’s biggest carrier Chunghwa Telecom, said Monday night in remarks at a company event. “It may take a few more days. The competition is fierce.”
While some other sales of 5G spectrum in similar bands have drawn bigger totals, Taiwan’s is the richest relative to population, according to New Street.
The Taiwanese bids set a new bar of $0.51 per megahertz pop – an industry term that takes into account both the bandwidth and population that the carrier is paying for – which New Street Research analyst Vivek Stalam says is $0.10 above the previous high reached during Italy’s mid-band spectrum sale in 2018.
An airwaves sale in Italy last year drew $7.6 billion, the most after Germany’s $7.4 billion sale. Taiwan’s population of 24 million is less than half of Italy’s 60 million and Germany’s 83 million.
Stalam said Taiwan’s bidding war suggests strong demand for mid-spectrum airwaves like the 3.5Ghz band in other markets, including for a U.S. sale of the so-called C-Band that could bring about $50 billion.
The final spectrum fee total in Taiwan is expected to reach NT$114.9 billion, Credit Suisse analysts wrote in a Jan. 2 note. That amount would fall slightly shy of the NT$118.7 billion Taiwan raised from its 4G auction in 2013.
Taiwan has about 29 million mobile phone accounts, an average of more than one per person, but its neighbor China has more than a billion. What makes Taiwanese subscribers especially attractive is that they’re the biggest consumers of data in Asia, according to researcher Tefficient. Average per-user data consumption at Taiwan’s carriers reached as high as 17.6GB per month, compared with 7.6GB in China and 8.5GB in South Korea.
South Korean carriers established the world’s first full commercial 5G services last April. They are expected to have reached 5 million subscribers by the end of 2019. Operators in other countries including the U.S., U.K., Japan and Australia have also offered limited services to the public with plans to introduce wider networks this year. Debby Wu, Bloomberg