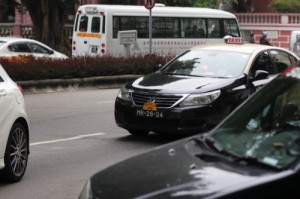 The Macau government announced in the Government Gazette yesterday that  taxi fares will increase on December 14. While authorities have claimed in a press release that the fare adjustment has balanced the demand from the taxi industry and the need for reasonably-priced transportation, some still do not agree with the rise.
After the new fares come into force next month, the flag fall rate will rise from MOP15 to MOP17. Additional charges for every subsequent 260 meters after the first 1,600 meters will also increase from MOP1.5 to MOP2. For every minute of flag-fall waiting time, the charge will also increase to MOP2.
Several figures have been cited to support this decision. Among these, data from the Statistics and Census Service shows the Composite Consumer Price Index and the petrol price have risen 12.57 percent and 11.19 percent respectively since the previous fare increase in July 2012. The salary of commercial drivers has increased by almost 9.72 percent as well. The bureau said it will coordinate the adjustment of the fare meter with the taxi industry later.
However, a taxi driver told TDM that an increase in fare costs is not necessarily beneficial for them because this can trigger an increase in taxi rent. He said that the additional two dollars in the flag fall rate is not going to help rising costs and higher rent.
Meanwhile, a resident believed that a MOP17 flag fall rate is too much and complained about the difficulty in stopping taxis. A tourist, on the other hand, suggested that the fare change is not going to affect her because she is not going to pay the regular fare anyway and will instead negotiate with the drivers to avoid overcharging. JPL