Teens love vacation selfies; adults, not so much 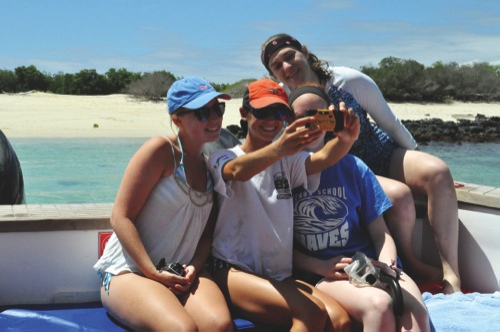 Jacquie Whitt’s trip to the Galapagos with a group of teenagers was memorable not just for the scenery and wildlife, but also for the way the kids preserved their memories. It was, said Whitt, a “selfie fest.”
For this generation, “digital devices are now part of the interpretive experience,” said Whitt, co-founder of Adios Adventure Travel.
Indeed, many parents love seeing their kids taking selfies and posting to social media when they travel. It shows “they are engaged and excited about where they are and what they are doing,” said Susan Austin, a photographer and Iowa mom. “To some, it might be bragging, but I think it’s more about a way today’s teens connect with and feel part of a group.”
But some adults think there’s a downside to vacation selfies. They see them as narcissistic distractions that can detract from the travel experience. And they point to controversial examples — like a smiling selfie from Auschwitz posted to Twitter — as proof of the potential for poor judgment when young travelers use social media. 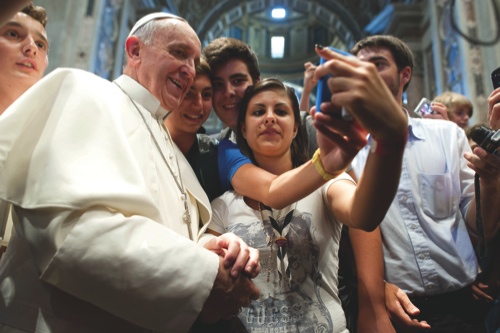 Pope Francis has his picture taken inside St. Peter’s Basilica with youths who came to the Vatican for a pilgrimage

In addition, when traveling teens spend time taking selfies, “they’re so busy documenting, I wonder whether they’re actually experiencing it,” said Peg Streep, who writes about psychology and millennials. “What should be an experience of learning and growth instead just says, ‘Look at me.’ It’s a narcissistic moment that’s really about getting likes.”
Streep pointed to a study by Linda Henkel of Fairfield University in Connecticut that found museum visitors remember more about what they’ve seen if they don’t take photos of the objects they’re viewing. That suggests that any type of picture-taking can take “you out of the moment of the experience and shifts your attention.”
Another concern is practical. A real-time selfie from a far-off place tells the world you’re not home. Leora Halpern Lanz, of Long Island, New York, loves it when her three kids take vacation selfies because it’s their way “of validating where they were.” But they’re not allowed to post images until the trip is over: “I don’t need their friends or friends of friends knowing the house is empty.”
Lanz says the widely criticized Auschwitz selfie also shows “the risks of kids posting on social media” when they don’t know what’s appropriate. 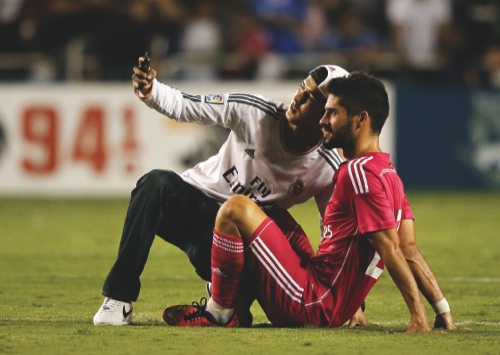 A fan that made it onto the field takes a selfie with Real Madrid’s Isco, righ

Breanna Mitchell, the young woman who took the smiling Auschwitz selfie, received death threats and messages urging her to kill herself after the image went viral. In a video interview with TakePart Live, Mitchell said the selfie was misinterpreted. She’d studied World War II history with her father and they’d planned to visit historic sites together, but he died before they could make the trip.
Her selfie from the grounds of the concentration camp was her way of saying, “I finally made it here. I finally got where me and my daddy had always said we were going to go,” she told TakePart Live. Looking back now on the selfie, she says, “I just went so wrong with that.”
Still, most travel selfies are innocent and purely celebratory — as well as being a way for teens to keep in touch with peers. Taylor Garcia, 17, who traveled to Texas this summer on a family road trip from Oklahoma, says selfies are a fun way to remember places like Disney, SeaWorld and the Caribbean, but she also takes them “because I want to show my friends what I’m doing.”
Her mom, Melissa Garcia, who posts her own family trip photos on her blog, ConsumerQueen.com, encourages the selfies. “It’s a great way to preserve memories,” she said, adding that other families have contacted her after seeing the photos to get advice for their trips.
Austin’s daughter Abigail, 18, who shared selfies from a trip to Portugal, doesn’t see the point of posting travel pictures without familiar faces in them. She wants a photo that shows, “Hey, I’m having fun! And I like seeing them of other people, too.”
But at least one tour company, Tauck, has a written policy discouraging digital devices. For Tauck’s Bridges program, which specializes in multi-generational family trips, guests are asked to “turn off and stow their smart phones, tablets and other portable electronic devices during shared group time.”
Tauck spokesman Tom Armstrong says the company understands that digital devices can help teens pass the time during long car rides, flights or other downtime, “and we have no issue with that.” But “when the tour director is giving commentary, or during museum visits, we think that our younger guests will actually get much more out of their trip if they’re engaged in the experience and not distracted.”
The bottom line, says Whitt: “Like all new emerging technology, the devices can be fun and wholesome, entertainment for all ages, or misused.”

What do you call a group selfie? An usie, of course! As in “us.” Pronounced uss-ee, rhymes with fussy. “Usies are a growing trend that I think have far more social value than selfies,” said Michal Ann Strahilevitz, a professor of marketing at Golden Gate University in San Francisco who studies consumer behavior. “It’s magical capturing moments we share with other people.” In contrast to one-person selfies, usies are “more about the relationship, and less about you and your hair,” she said.
The word — sometimes spelled usie, sometimes ussie — has been showing up in written material since at least April 2013, according to Ben Zimmer, executive producer of Vocabulary.com and language columnist for The Wall Street Journal.A Business Insider story from January noted that the outstretched arm of the photo-taker in usies is a “signature” of the image, because the shooter has to get the camera far enough away to get the group in the frame. The Times of India in March said Pope Francis’ group selfie with visitors at the Vatican last year “could possibly be the first chronicled celebrity usie.” And a PopStopTV.com report from June was headlined: “Selfies Are Dead, Usie is the Latest Trend!”
But the term is so new and relatively obscure that it wasn’t used to describe the famous group selfie of Ellen DeGeneres and other celebrities in March during the Academy Awards. “There are countless variations on the theme, including ‘twofie,’ ‘threefie,’ et cetera, if you want to specify the number of people photographed,” said Zimmer.