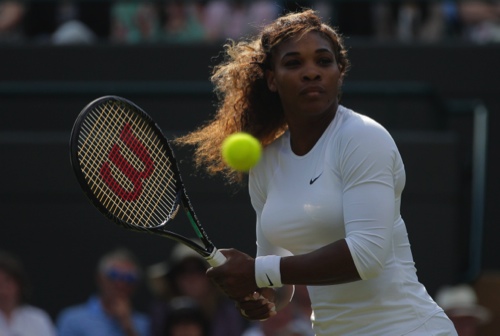 Serena Williams finally realized what happened days later, when she was allowed to get out of bed. Williams said she was barely aware of how sick she was as she tried to play through a viral infection that caused her to lose equilibrium during a women’s doubles match with sister Venus at Wimbledon. It was only later, when she was able to clear her head, that she realized the seriousness of her situation.
“It was interesting and I was scared after,” Williams said. “I didn’t realize how I felt until later. In the moment I didn’t realize how sick I was. It’s weird but that’s the fight in me. I never know when to say when.”
She would have continued had not Venus insisted she get off the court.
“She kept saying, ‘walk off the court, I’m the older sister and I say you have to leave.’” Williams said. “I’m feeling really good right now and I’m happy to be here.”
Williams said she will undergo a series of tests at the end of the season.
“I was really ill,” she said. “I got to thinking about a lot of things and because of family history, I’ll get the tests done and we’ll go from there.”
Williams apparently expected to play in Bastad the following week until her mother nixed the idea.
Doctors wouldn’t let her leave her room, so she got some much-needed rest before resuming a full schedule that included a working vacation and a movie shoot.
“I was going to stay in Europe and play in the tournament,” she said. “Going to Croatia was unexpected. I’m glad I went. It was so pretty.”
Williams’ long-time hitting partner Sascha Bajin suggested the trip, telling her “there are more tennis courts than people there. And there were tennis courts everywhere you looked.”
She practiced in the morning and took it easy the rest of the day.
“I was running and swimming and jumping in the ocean,” Williams said. “I tried to stay away from the sharks. That’s pretty good motivation. I didn’t want to be eaten by sharks.”
Williams maintained that after three days in bed, she had already moved on and stopped thinking about it. She also ignored internet rumors.
Looking comfortable and relaxed, the world’s No. 1 player said she’s ready to renew her pursuit of excellence on the court.
Williams meets the Czech Republic’s Karolina Pliskova today in the second round of the Bank of West Classic. Pliskova beat Japan’s Kimiko Date-Krumm, 6-1, 6-3, on Monday.
“I’ve always felt good about this tournament and just being here,” she said. “This has always been a special place for me.”
She used the Bank of the West to restart her career in 2011, recording her first WTA title in over a year. She was ranked No. 175 at the time and finished the year No. 12.
Williams, who has appeared in numerous television shows, is shooting a movie in Toronto. “I don’t know if that’s supposed to be secret. I love doing films, I always have.”
Third-seeded Angelique Kerber watched Williams practice and doesn’t see anything wrong in her game.
“She is back, for sure,” Kerber said. “She’s the favorite here and she is a champion. We’ll see what happens in the next few days.”
In other first-round matches, qualifier Sachia Vickery topped Shuai Zhang, 6-1, 6-2 and qualifier Naomi Osaaka defeated Samantha Stosur, 4-6, 7-5 (7), 7-5.
“This was a real good confidence booster for me,” Vickery said. AP