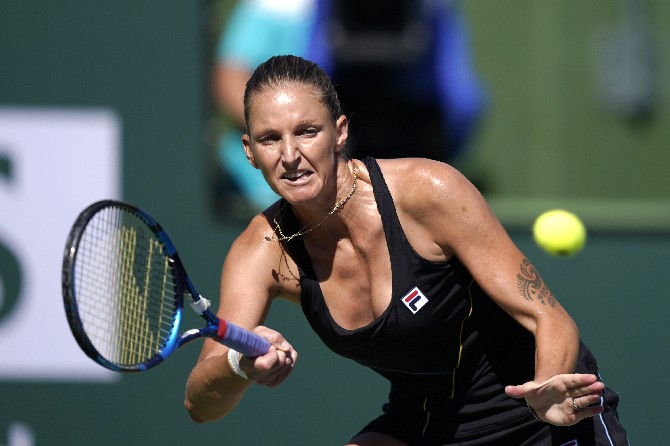 Top seeds Daniil Medvedev and Karolina Pliskova rolled to straight-set victories at the BNP Paribas Open on Saturday, when several lower-seeded players were knocked out.
Medvedev beat American Mackenzie McDonald 6-4, 6-2, extending his winning streak to eight matches dating to his U.S. Open championship last month. Medvedev never faced a break point against McDonald, who was was broken three times.
“I’m actually really pleased because usually I haven’t played well in Indian Wells and I haven’t been playing that well in practices,” Medvedev said. “I’m really happy with my performance. That’s the most important thing no matter how I played before the tournament.”
Pliskova advanced to the third round with a 7-5, 6-2 win over Magdalena Frech at the combined ATP and WTA event. Pliskova fired six aces, giving her a Tour-leading 387 this year, and converted five of her six break points.
Bianca Andreescu, the 2019 champion, beat Alison Riske 7-6 (2), 7-5.
Fifth-seeded Garbine Muguruza was the highest-seeded woman to lose.
Muguruza, who won last week’s event in Chicago, lost to Ajla Tomljanovic 3-6, 6-1, 6-3. It was Tomljanovic’s first win in seven tries over a Top-10 player this year. She was a quarterfinalist at Wimbledon in July.
Anna Kalinskaya outlasted No. 28 Sara Sorribes Tormo 6-3, 4-6, 6-2 and American Amanda Anisimova defeated No. 30 Camila Giorgi 6-4, 6-1.
No. 12 seed Ons Jabeur, who lost to Muguruza in the Chicago final, advanced with a 6-2, 6-7 (5), 6-3 win over Anastasija Sevastova for her Tour-leading 45th match victory of the year.
Coco Gauff, seeded 15th, outlasted Caroline Garcia 6-3, 6-7 (2), 6-1, offsetting 12 aces with seven double faults.
No. 18 Anett Kontaveit retired trailing 6-3, 5-2 against Martina Trevisan. No. 22 Danielle Collins advanced when Lauren Davis retired trailing 6-1.
On the men’s side, No. 8 Hubert Hurkacz, No. 11 Diego Schwartzman, No. 16 Reilly Opelka and No. 18 Daniel Evans won.
No. 9 Denis Shapovalov was leading 3-0 when Vasek Pospisil retired. Tommy Paul defeated No. 28 Duasn Lajovic 6-3, 6-3 and Frances Tiafoe beat No. 32 Sebastian Korda 6-0, 6-4. MDT/AP