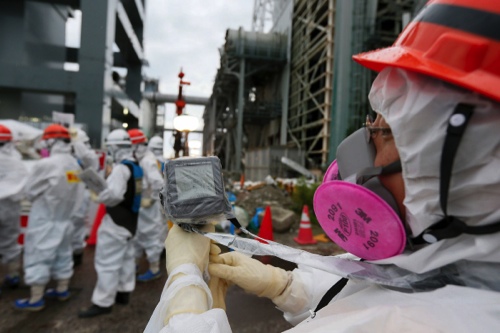 Four workers at Tokyo Electric Power Co.’s wrecked Fukushima plant have filed a lawsuit against the utility alleging unpaid wages for work they did at the site, according to the plaintiffs’ attorney.
The four, who worked for sub-contractors, allege their wages did not increase after Tepco, as Japan’s biggest utility is known, announced radiation risk supplements for laborers at the site, according to the suit that lawyer Tsuguo Hirota said was filed yesterday at the Iwaki branch of the Fukushima district court. They are demanding about 63 million yen (USD600,000) in compensation.
The lawsuit is the latest in a series of claims against Tepco since the March 2011 nuclear disaster, in which an earthquake and tsunami caused the meltdown of three reactors at the Fukushima power station.
The Fukushima district court ruled earlier this month that the utility was liable for the suicide of a woman who was forced to evacuate from her home because of radiation fallout in the area around the nuclear plant. Tepco was ordered to pay 49 million yen in damages to the women’s family.
The utility has also been sued for damages by dozens of U.S. servicemen who claim they were exposed to radiation while helping with relief missions following the disaster, according to court records.
An inquest committee, meanwhile, recommended last month that prosecutors indict former Tepco chairman Tsunehisa Katsumata and two other executives over claims of professional negligence leading to the disaster.
In the latest suit, the lawyer Hirota said that although the individuals were not directly employed by Tepco, the utility should be held responsible for labor conditions as it is the operator of the Fukushima Dai-Ichi plant. Bloomberg