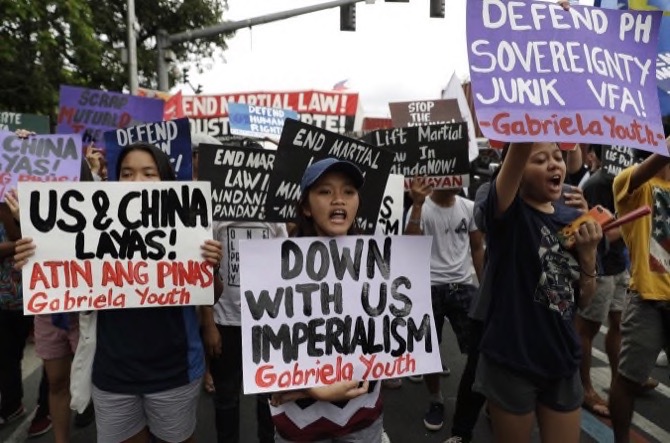 Student protesters shout slogans as they hold a protest in front of the U.S. embassy in Manila yesterday

The United States is more likely to be involved in a “shooting war” in the disputed South China Sea than the Philippines but the latter would be embroiled in such a conflict just the same because of its 1951 Mutual Defense Treaty with Washington, the Philippine defense chief said yesterday.

Defense Secretary Delfin Lorenzana said the treaty needed to be re-examined to clear ambiguities that could cause chaos and confusion during a crisis. He cited China’s aggressive seizure in the mid-1990s of a Philippine-claimed reef, saying “The U.S. did not stop it.”

The Philippine proposal for the treaty’s review was among the key topics when U.S. Secretary of State Mike Pompeo met with President Rodrigo Duterte and other officials during an overnight visit to Manila last week.

The treaty behind one of the longest-standing security alliances in Asia calls on the U.S. and the Philippines to come to each other’s defense against an external attack. In the past, the Philippines has tried to clarify whether the treaty would apply if its forces come under attack in a disputed region like the South China Sea, where it has been locked in tense territorial conflicts with China and four other governments.

Pompeo assured the Philippines during his visit that America will come to its defense if its forces, aircraft or ships come under armed attack in the South China Sea, in the first such public U.S. assurance in recent memory.

The top American diplomat assured that the U.S. is committed to ensuring the South China Sea remains open to all kinds of navigation and that “China does not pose a threat” of closing the disputed sea lanes.

Lorenzana said U.S. forces, which have stepped up so-called freedom of navigation patrols in the strategic waterway, would more likely end up getting involved in an armed conflict than the Philippines, which he foresees would not engage any country in a war in the contested territories.

“The United States, with the increased and frequent passage of its naval vessels in the West Philippine Sea, is more likely to be involved in a shooting war,” Lorenzana said in a statement, using the Philippine name for the South China Sea.

“In such a case and on the basis of the Mutual Defense Treaty, the Philippines will be automatically involved,” Lorenzana said.

“It is not the lack of reassurance that worries me. It is being involved in a war that we do not seek and do not want,” Lorenzana said.

The long-seething territorial disputes are a key irritant between Washington and Beijing, which has turned several disputed barren reefs into islands with runways and other military facilities. The U.S. has declared that the peaceful resolution of the disputes and freedom of navigation and overflight in the contested areas are in the U.S. national interest.

Presidential spokesman Salvador Panelo said yesterday the defense department was checking a report that Chinese vessels have been blocking Filipino fishermen from approaching sandbars near Philippine-occupied Thitu Island, which is called Pag-asa by Filipinos, in the disputed waters.

Philippine officials have said China has deployed surveillance ships and fishing flotillas off three newly emerged sandbars called Sandy Cay near Thitu since 2017 to prevent the Philippines from occupying them.

In addition to China, the Philippines, Vietnam, Malaysia, Taiwan and Brunei have overlapping claims in the strategic waters. U.S. Navy ships have sailed close to Chinese-occupied islands to assert freedom of navigation, provoking angry protests from China and tense moments between the rival naval forces.

Lorenzana said yesterday that the treaty would have been reviewed as far back as 1992, when huge U.S. military bases were closed in the country and the Philippines lost its security umbrella.

A few years after American forces left, the Chinese began their aggressive actions in Mischief Reef — “not an armed attack but it was aggression just the same. The U.S. did not stop it,” Lorenzana said.

Lorenzana was referring to the Philippine-claimed reef, which China seized around 1995 in the Spratlys, the most hotly contested territory in the busy South China Sea. Jim Gomez, Manila, AP