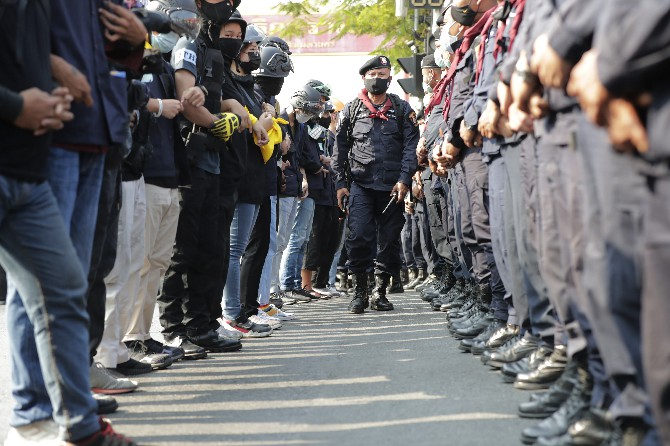 Pro-democracy demonstrators in Bangkok marked United Nations Human Rights Day yesterday with rallies calling for the abolition of Thailand’s strict royal defamation law, which was recently revived to prosecute more than 20 of the protest movement’s leaders.
Somyot Prueksakasemsuk, one of the leaders, submitted a letter to the United Nations yesterday urging it to pressure the Thai government to stop using Article 112 of the Thai Criminal Code, which forbids defamation of key members of the monarchy. Somyot, a former magazine editor, was previously imprisoned for seven years for publishing articles deemed to violate the lese majeste law.
“Article 112 is an outdated law that no other countries have endorsed. It prevents people from expressing their opinion freely and the government has used it to destroy its opponents,” Somyot said.
Somyot said the pro-democracy group will send representatives to a U.N. human rights conference in Geneva, Switzerland, in May 2021.
The protests also coincided with Thailand’s Constitution Day, a national holiday marking the country’s adoption of its first constitution in 1932, which meant that many offices in the city were closed. The demonstrations drew significantly smaller crowds than other recent rallies, which have attracted tens of thousands of participants.
Ahead of the protests, government security officials erected barricades using shipping containers and barbed wire, and police were deployed to prevent any possible move toward Chitralada Palace, the residence of King Maha Vajiralongkorn.
For months, the student-led protest movement has been campaigning for Prime Minister Prayuth Chan-ocha and his government to step down, the military-implemented constitution to be amended to make it more democratic, and the monarchy to be reformed.
Many in the movement believe the monarchy, whose fortune is estimated at more than $40 billion, holds too much power for a constitutional monarchy. Their challenge is fiercely opposed by royalists, including many in the army, who consider the royal institution an untouchable bedrock of national identity.
A conviction on a lese majeste charge can result in up to 15 years in prison for each offense. The law is controversial in part because anyone — not just royals or authorities — can lodge a complaint, and it has been used as a weapon in political vendettas.
By early afternoon the group that gathered outside the U.N. building had moved to join another one rallying beside a memorial to protesters killed in a crackdown by security forces in 1973.
“Some people were in prison for years just because they spoke the truth,” said Parit Chiwarak, one of the protest leaders, speaking about the law protecting the royal family. “We will do everything to get rid of this law and reform the entire system of the monarchy.”
The royal defamation law had not been enforced for three years after King Maha Vajiralongkorn informed the government that he did not wish to see its use.
But according to the group Thai Lawyers for Human Rights, 23 people have been charged under the law since Prayuth said last month that it would be among those used against demonstrators going forward.
Prayuth is a former army general who came to power in a 2014 coup and was elected prime minister last year. Chalida Ekvitthayavechnukul, Bangkok, AP