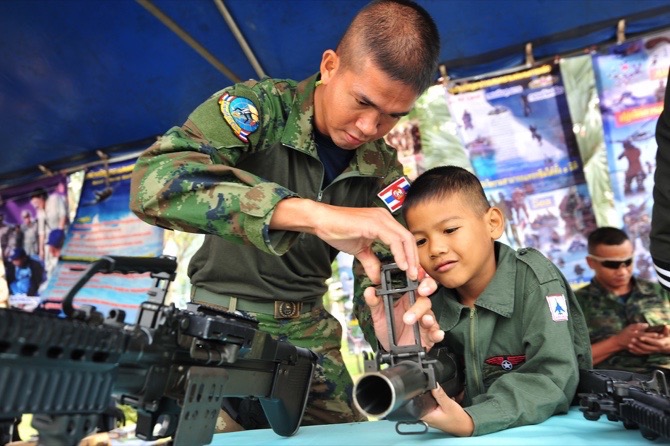 The government house where children are allowed to visit the prime minister’s office has become the highlight of Thailand’s annual children’s festival on Saturday.

Thai government offices opened their doors to children on the second Saturday of every January for more than 10 years to celebrate the National Children’s Day. The potential future leaders of the country got a chance to top the seat of the prime minister at the government house.

For this year, Thai Prime Minister Prayut Chan-o-cha has given a motto for children to follow: “Think, Analyze, Promote Creative Technology” which he intended to encourage children and youth to always seek out new knowledge for themselves while being aware of how to use technology in a creative manner. Exhibitions on science and technology were held in the conference hall of the government house.

Jirapat, 11, once represented Thailand in the international robotics competition and won the champion, brought to the festival the robots he designed. “I hope the exhibition will arouse more children’s interest on robots and become their access to the world of science,” said the teen designer.

Activities, such as air shows, games and concerts were in full swing across the country. The atmosphere was lively especially in barracks where sophisticated tank VT-4 was on display along with helicopters and artillery pieces. Children flocked there and were seen riding in tanks, helicopters and armored cars.   MDT/Xinhua