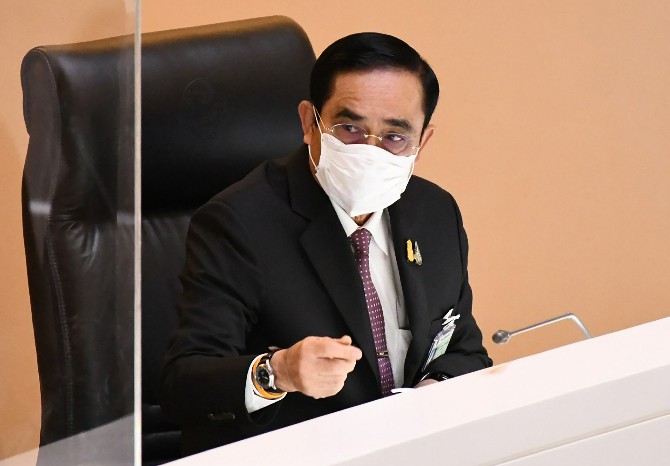 Thai lawmakers yesterday began a no-confidence debate targeting Prime Minister Prayuth Chan-ocha and five of his Cabinet members, with the opposition focusing on charges the government bungled its handling of the COVID-19 pandemic.
The debate is scheduled to last four days, with voting by the lower house set for Saturday. Organizers of ongoing anti-government street protests have vowed to step up their own separate efforts during the debate to force Prayuth out of office.
His coalition government is generally expected to turn back this week’s challenge, even though it has come under intense criticism for failing to secure timely and adequate supplies of COVID-19 vaccines.
Sompong Amornvivat, leader of the main opposition Pheu Thai party, kicked off the debate with a fierce attack, charging that Prayuth is “a power-crazed arrogant person unsuitable to lead the country.”
“If we let him continue his leadership, it will lead to more people being infected and losing their lives,” said Sompong. “There won’t be enough crematoriums in service and there will be no way to stop the spread of the disease.”
He drew an objection from a government member of parliament when he said the situation recalled a saying that “A stupid leader will lead us all to death, because a stupid person with power is the worst danger.”
This is the third no-confidence debate faced by Prayuth since he came to power after a 2019 general election. He also served as prime minister in a military government in 2014-2019 after seizing power in a coup as army commander.
A third wave of the coronavirus arrived in April and spread rapidly, accounting for 97% of the more than 1.17 million confirmed cases since the pandemic began, and more than 99% of the 11,495 total deaths.
Prayuth’s administration was largely successful at keeping the coronavirus at bay last year, although lockdowns and travel restrictions devastated the economy, particularly the key tourism industry, which virtually collapsed after most foreign visitors were barred entry. The government’s handling of the economy also promises to be a hot subject of debate.
“I think everyone can feel the same hopelessness and doubt about how our economy will recover,” Pichai Naripthaphan, deputy leader of the opposition Pheu Thai party, told The Associated Press ahead of the debate. He noted that Thailand’s economy is forecast to grow the slowest this year of all Southeast Asian nations. “We hope that this no-confidence motion will lead to some changes — either a Cabinet reshuffle or the coalition parties’ withdrawal — later.”
Digital Economy Minister Chaiwut told reporters ahead of the debate that he is ready to field the opposition’s questions.
He said the government is focusing on solving the COVID-19 problems as soon as possible so that people can live their lives normally, and if there is a political change, that effort might falter.
“It is not the time to focus on politics,” he said. “If the overall situation improves next year, then we can discuss political changes.”
Chaiyun Chaiyaporn, a political scientist at Bangkok’s Chulalongkorn University, said he does not believe the debate can break up the ruling coalition and bring down the government. He suggested that the targeted ministers will be able to successfully defend their handling of the pandemic.
“The debate by the opposition parties may reduce Prayuth’s legitimacy among the public, but not among the coalition parties. I think their relationship remains strong,” he said.
In addition to Prayuth, the opposition plans to grill government ministers belonging to three main coalition parties. They are Deputy Premier and Public Health Minister Anutin Charnvirakul and Transport Minister Saksayam Chidchob from the Bhumjai Thai Party, Labor Minister Suchat Chomklin and Digital Economy Minister Chaiwut Thanakamanusorn from the ruling Palang Pracharath, and Agriculture Minister Chalermchai Sri-on from the Democrat Party.
Prayuth and Anutin will likely bear the brunt of the opposition’s attack, since they are the ones most closely associated with COVID-19 policy. CHALIDA EKVITTHAYAVECHNUKUL, BANGKOK, MDT/AP