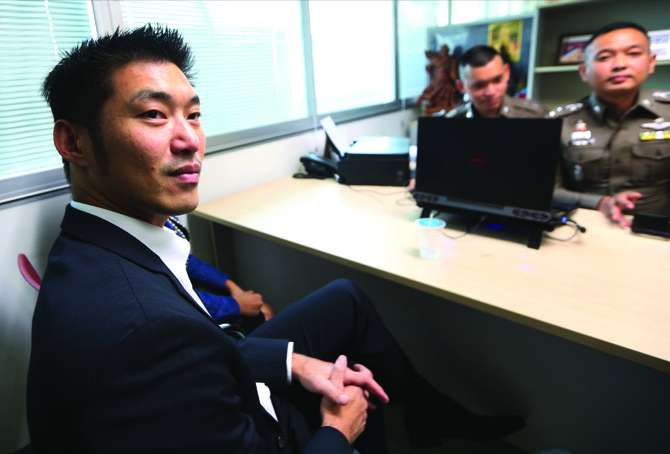 Leaders of a new Thai political party that strongly opposes military rule appeared before police yesterday to hear charges over a Facebook video broadcast that authorities allege violated the law.

Future Forward party leader Thanathorn Juangroongruangkit said he and the two other party members asked to submit written statements to police in 45 days and refused to provide statements because it was the first time they had seen details of the charge.

Acting on a complaint filed by the ruling junta, police in August charged the three with violating a section of the law that makes it a crime to spread false information or information that damages the country’s stability online. They face a maximum five-year prison sentence if convicted.

The charge involves a June 29 Facebook live video posted on the pages of Thanathorn and the party. Thanathorn said in the video he criticized the ruling junta for recruiting veteran politicians to join political parties that support it.

The Thai junta has kept a tight lid on dissent since it seized power from an elected government in a 2014 coup, repeatedly detaining critics and delaying promised elections. It most recently said elections would be held next year.

Critics accuse the junta of rigging the electoral system so that it can maintain control of the country even after the election.

Thanathorn said he views the police charge as intimidation by the ruling junta to silence its opponents and limit free speech. He said he will not stop being critical of the junta.

“We can’t stop ourselves from righteously expressing our opinions. If we do that it would mean that we’re afraid,” Thanathorn said after he met with officers of the Technology Crime Suppression Division. “And if we’re afraid, the junta wins.”

The junta has eased some restrictions on political activities to allow parties to conduct basic functions ahead of planned elections but they are still barred from campaigning.

A  disaster response official says a landslide at a refugee camp in northern Thailand has left one person dead and seven missing.

The official in Mae Hong Son province said yesterday that 12 people were injured at the Mae La Oon refugee camp, which houses about 9,000 people, mostly members of the Karen ethnic minority from Myanmar.

He said it was caused by heavy rain and forest runoff. The camp, recognized by the United Nations, sits in a hilly area around the banks of a river.

The Bangkok Post newspaper, citing a report by the provincial governor, said the fatality was a 2-year-old girl.