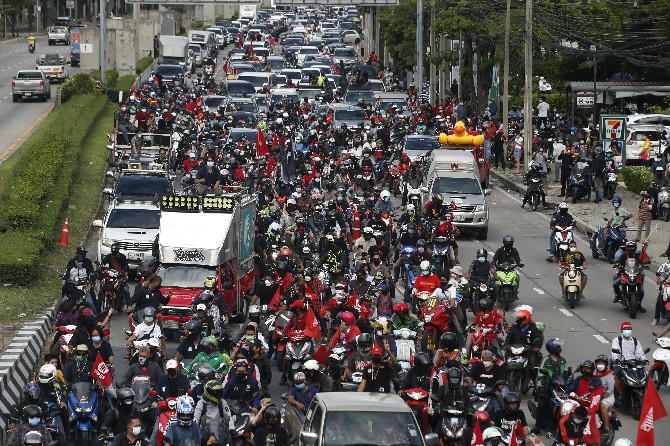 A long line of cars, trucks and motorbikes wended its way yesterday through the Thai capital Bangkok in a mobile protest against the government of Prime Minister Prayuth Chan-ocha. The protesters on wheels hope their nonviolent action, dubbed a “car mob,” can help force the ouster of Prayuth, whom they accuse of botching the campaign against the coronavirus.
“There is only one message from this car mob, which is ‘Prayuth get out!’” Sombat Boonngamanong, a veteran social activist who helped originate such protests in July, said ahead of the protest. “He has had a chance to run the country for seven years. He has proved that he is incapable of being the country’s leader, so we cannot let him continue.”
The car mob tactic has visibly been attracting more and more participants, although its mobile nature makes it hard to estimate its size. Some onlookers along the route displayed supportive banners and flashed the opposition’s three-finger salute as the lengthy parade of vehicles passed.
Prayuth initially took power in 2014, when as army commander he launched a successful coup against an elected government. He continued to hold power when he was named prime minister as head of a coalition government after a 2019 general election.
Organizers say the protest on wheels evades legal limitations on gatherings that are aimed at enforcing social distancing in order to fight the spread of the coronavirus. Keeping things moving also makes it more difficult for police to box demonstrators in, and lowers the possibility of violent clashes, they believe.
“They impose the law to prevent the spreading of COVID-19, while a car mob is designed with the same concept,” said Sombat. “If we use a bus, that can violate the law. But we use our own cars, each of which carries fewer than five people. So how could that break the law?”
Prayuth has shown his concern about the safety of both protesters and the authorities, as each protest could become a new COVID-19 cluster, government spokesman Thanakorn Wangboonkongchana said last week. MDT/AP