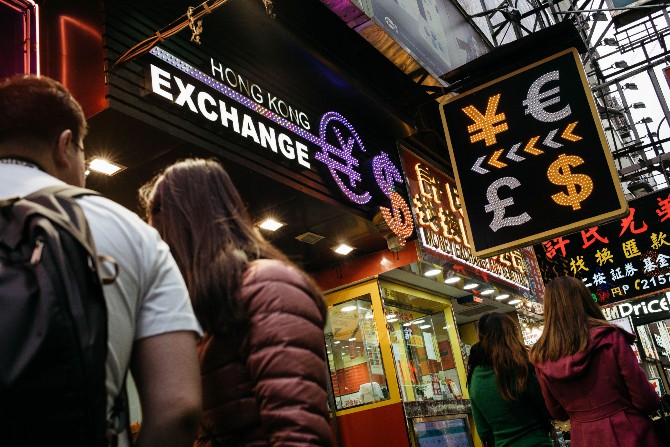 The threat of U.S. action to undermine Hong Kong’s longstanding U.S. dollar peg is highly unlikely to become reality given the practical difficulties of pursing such a path and the damage it would do to U.S. interests, economists say.
Economists reacted after a report that some advisers to President Donald Trump want the U.S. to undermine the Hong Kong dollar peg as the administration considers options to punish China for limiting Hong Kong’s autonomy, according to people familiar with the matter. Hong Kong has pegged its currency to the U.S. dollar since 1983, allowing it to fluctuate within a fairly strict band that has centered around 7.8 per U.S. dollar.
The most straightforward way to implement such a strategy would be for the U.S. to impose limits on the ability of American and potentially other foreign banks to sell U.S. dollars to Chinese lenders, possibly via sanctions on Chinese banks, said Ding Shuang, chief economist for Greater China and North Asia at Standard Chartered Plc in Hong Kong. But that proposal opens the U.S. to potentially damaging consequences, he said.
That approach “sounds quite radical and will have profound and unpredictable implications not only for China’s banks, but also the U.S. banks and the global financial market,” Ding said. “I see a low likelihood for the U.S. to resort to such a potentially self-defeating approach, before options that cause more problems for China than for the U.S. are exhausted.”
China’s strong external position – including a current account surplus, high foreign exchange reserves and anticipated speedier recovery from the pandemic – are factors that will help to mitigate the fallout from such a step, Ding said.
The proposal is said to face strong opposition from some in the U.S. administration and the idea of attacking the dollar peg is lower on the list of options under discussion – because it would hurt Hong Kong banks and the U.S. more than China.
Yet if the U.S. were to impose such restrictions, one way would be for the U.S. Treasury to limit U.S. banks from providing dollar funding to Hong Kong and Chinese banks, which would drive up costs, said Stephen Innes, chief global market strategist with AxiCorp.
“Drying up the swap market would be the easiest vehicle,” he said. “To the degree they can exert that pressure is yet to be seen, as U.S. banks don’t want to give up access to China markets.”
Other financial measures are on the table, especially given the U.S. took the step even before imposition of the security law to declare that Hong Kong was no longer significantly autonomous from China. Kevin Lai, chief economist for Asia ex-Japan at Daiwa Securities Group Inc. in Hong Kong, said an “extreme” alternative would be to cut off Hong Kong from SWIFT, or the Society for Worldwide Interbank Financial Communication, a network used to clear global currency transactions.
“That’s a nuclear option – it’s unlikely but not impossible,” he said. “Without access to the global U.S. dollar pool, the Hong Kong dollar will not be functional.”
A less dramatic option would be to set limits on exposure to the Hong Kong dollar for U.S. banks and firms, said Becky Liu, head of China macro strategy at Standard Chartered.
“In recent days the U.S. has taken some totally unexpected actions like withdrawing from the WHO,” she said, referring to the World Health Organization. “So the likelihood of the U.S. doing something is still very likely, it’s just likely to be less drastic in terms of impacting the convertibility between the HKD and USD.”
Bloomberg economists say that Hong Kong appears to have the will — and it certainly has the means – to keep the peg. Any move by the U.S. to try to force a decoupling strikes us as extremely unlikely, given the prohibitively heavy costs. Bloomberg