The US-China relationship is worsening rapidly before talks 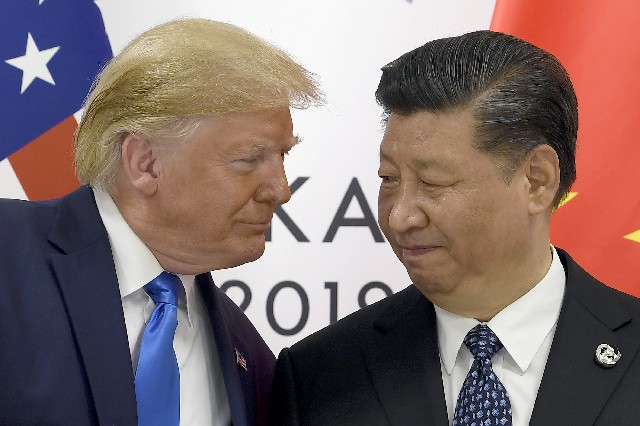 This was supposed to be the week U.S.-China trade talks got back on track and the two sides found a way to avoid sending more unsettling signals to financial markets and a global economy that looks increasingly fragile.
But that didn’t take long to change. If the state of relations between the world’s two largest economies was a tangled mess before the latest round of Chinese negotiations get underway today, the tangle has only gotten worse.
The move this week to blacklist Chinese tech giants like video surveillance company Hikvision and the world’s most valuable artificial intelligence startup, SenseTime, took the Trump administration’s economic wars against China in a new direction.
Not only did the U.S. provocatively invoke its right to address human rights violations “within China,” as Commerce Secretary Wilbur Ross did, it also targeted a new swathe of Chinese technology champions. The stated reason was the companies’ involvement in China’s crackdown on Muslim minorities in the region of Xinjiang, but the move also strikes a blow against sectors like AI where China is increasingly dominant. Adding to the frictions, the U.S. is slapping visa bans on Chinese officials linked to the abuses in Xinjiang.
That came alongside more news yesterday [Macau time] that, despite White House denials, the conversation over how the U.S. can restrict financial flows into China continues. The focus is narrowing to how to pressure index companies like MSCI and Bloomberg Barclays to reduce the weighting Chinese companies get in emerging market indexes. Also under discussion is how to limit federal government retirement funds from investing in China.
But there is a barely hidden goal behind both moves. China hawks inside the administration and on Capitol Hill want to restrict Chinese access to U.S. technology and capital. That isn’t going away.

Louder and louder in Washington
People close to the Trump administration have long acknowledged the narrow path they have to a deal with China. Any China deal betraying weakness by the Trump administration will be lambasted both by Democrats and Republicans. From the other side, even hawks in Washington recognize there is a limit to what China will commit to.
For evidence of what the potential political reaction to a weak China deal would be just look at the Republican backlash against this week’s moves to withdraw U.S. forces from Syria and abandon Kurdish allies. If Republicans see that as an unacceptable reversal imagine what hawks like Senator Marco Rubio would make of any broad compromise with a far bigger strategic rival in Beijing.
What’s newest, though, is how the popular conversation about China is spreading.
The moves against Chinese tech companies reflect growing bipartisan anxiety in Washington about China’s crackdown in Xinjiang. But it’s the worsening situation in Hong Kong that is really helping to crystallize things.
Conservatives have long seen Hong Kong as a bastion of relative economic liberty inside Communist China and been early backers of the protests there. So too have Democrats, albeit generally for broader reasons related to human rights. That’s one big reason that a bill that would remove Hong Kong’s special trade status has plenty of backing on Capitol Hill and could pass through Congress within weeks, presenting Trump with a dilemma over whether to sign it into law.
The other reason that bill looks like an increasing certainty is the shift of those China concerns into popular culture. China’s angry response – and the NBA’s subsequent bending to Beijing – following a Houston Rockets executive’s tweet backing the protests in Hong Kong has already fed further anger about how American companies often have to kowtow to do business in China. Now Chinese sponsors of NBA events are cutting ties to the league. Reinforcing the shift is the fact it comes alongside comedy show “South Park” getting caught in the Chinese censor’s net.
The economic wars, in other words, are becoming culture wars.

The economic damage is growing
Until this summer the notion that Trump’s trade wars would prove damaging to the U.S. and global economies was largely that – notional. But the data in recent months have been clear. You can quibble with the exact mix of causes, but you only have to speak to businesses to see the evidence building that Trump’s tariff wars and the uncertainty caused by them have contributed significantly to slowdowns in business investment and manufacturing.
The warnings about potential effect have also turned into ones about actual effect. Kristalina Georgieva, the new head of the International Monetary Fund, on Tuesday warned that a world that just two years ago was in a “synchronized upswing” was now looking at a “synchronized slowdown” tied to trade tensions.
The IMF would be lowering its projections for global growth for both 2019 and 2020 at its annual meetings in Washington next week, she said, with 90% of the world seeing slower growth.
The damage in the U.S. is also growing. The focus in recent months has been on the manufacturing recession in the U.S. and the swing states where it is hitting hardest. But it’s the unintended and unusual ways the damage is flowing through the economy that is arguably most fascinating.
In a new paper released this week, New York University economist Michael Waugh lays out a daunting correlation between Chinese retaliation and slowing U.S. auto sales. In the counties most exposed to trade with China – largely rural ones where China’s move to stop purchases of soybeans and other U.S. farm exports have borne the brunt – auto sales have dipped more than in others. The upper quartile of counties exposed to Chinese retaliation saw both a 3.8 percentage point decline in consumption growth and a decrease in employment growth, Waugh says.
“Chinese retaliation is leading to concentrated welfare losses in the U.S.,” he writes.

Deal grows more distant
Even before this week’s moves by the Trump administration, Chinese negotiators were signaling they were only prepared to discuss a much narrower deal than the grand rebalancing that the Trump administration has been pursuing.
Recent visitors to Beijing have been told any discussions over Chinese government subsidies are off the table, for example. Those subsidies are one of the “seven deadly sins” that Trump trade adviser Peter Navarro rails against and were a target of U.S. complaints long before Trump took office.
If the Chinese are not willing to even discuss them it’s hard to see how a credible deal is possible. Unless, of course, credibility isn’t the issue.
Trump has repeatedly in recent weeks said he is opposed to a “partial” or interim agreement with China that would see the Chinese step up purchases of U.S. farm exports and his administration put further tariffs on hold. He has also, however, touted at least one such limited deal that some close to his trade team quietly see as a possible model.
Although the Trump administration is eager to spin it as a major win, the pact it signed with Japan on Monday is a narrow one at best. It will reduce tariffs on about $7 billion in U.S. agricultural exports to Japan and finally give U.S. farmers the access to the Japanese market they had won in the Trans-Pacific Partnership that Trump pulled out of in January 2017. It includes a chapter on digital trade largely lifted from the TPP and Trump’s renegotiated Nafta. But it also relies on broader negotiations continuing, with the bulk of the economic relationship – and particularly the auto trade – left out of the deal.
Trump isn’t shy, however, in his touting of the Japan deal. On Monday he called it “historic” and a “game changer.”
Which may be an important signal. As the broader U.S.-China relationship continues to deteriorate and any deal looks increasingly distant, those may yet be words we hear the president utter some day on China. Shawn Donnan, Bloomberg