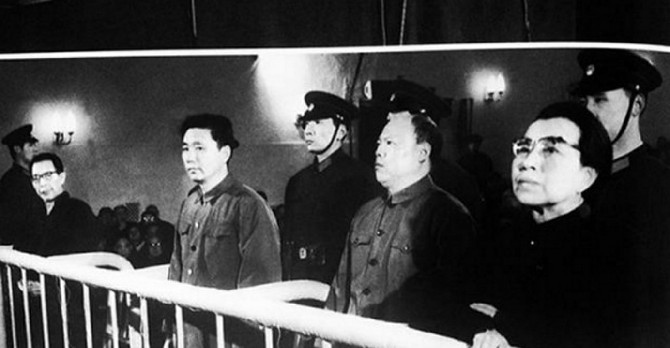 The new chairman of China’s Communist Party, Hua Guofeng, has ordered the arrest of four leading radicals in Peking.
It is a sign that China is changing political direction following the death last month of Chairman Mao Zedong.
The so-called Gang of Four is led by Chairman Mao’s widow Jian Qing, and includes Wang Hongwen, Yao Wenyuan, and Zhang Chunqiao.
They were active proponents of the Cultural Revolution instigated ten years ago by Chairman Mao.
This was a political and ideological campaign aimed at reviving revolutionary fervour and resulted in enormous social, economic and political upheaval.
Ideological cleansing began with attacks by young Red Guards on so-called “intellectuals” to remove “bourgeois” influences. It is believed millions were forced into manual labour, and tens of thousands were executed.
Mr Zhang rose up the ranks during the first year of the Cultural Revolution in Shanghai and was until recently chief political commissar of the armed forces.
Mr Wang had less power but was regarded a wonderboy – he rose to number three in the party in 1973 while still only in his late thirties, relatively young by Chinese standards.
Mr Yao, also a member of the Politburo standing committee, is regarded as dedicated, if not fanatical, in his belief in Maoist ideals of social development.
Jian Qing, formerly an actress, became Chairman Mao’s third wife in 1939. She is regarded as a radical and active proponent of Maoist principles but in the years before his death, had led an independent life from her husband.
News of the arrests have not been confirmed by China’s officials but it is believed the four were attempting a coup in the wake of the death of Chairman Mao on 9 September.
Some reports say Jian Qing was in the process of forging Chairman Mao’s will placing her as Mao’s successor, when she and her associates were surrounded by Hua Guofeng’s personal bodyguards and placed under house arrest.
They are being questioned about their campaign against former prime minister Zhou Enlai, who died in January.
Commentators say the arrests might lead to a liberalisation of foreign, cultural and economic policy -the Times newspaper editorial calls this latest move “the most potent sign of a new political direction” following 27 years of Maoist dogma.

The Gang of Four were kept under house arrest and, following a propaganda campaign against them, were expelled from the Communist Party in July 1977.
By the end of 1978 reformist Deng Xiaoping had effectively wrested power from Hua Guofeng – although he did not assume the title of premier of China and chair of the CCP until 1982.
On 20 November 1980 all members of the Gang of Four were put on trial charged with attempting to overthrow the government and establish a hardline Communist dictatorship.
They were sentence to death, later commuted to long-term imprisonment. After a period of political indoctrination Jian Qing was released in 1991 and died soon after – some reports say she committed suicide.
Wang Hongwen died in 1992, Zhang Chunqiao died in April 2005 and Yao Wenyuan died in December 2005.