This day in history | 1981 Thousands see Pope shot in Rome 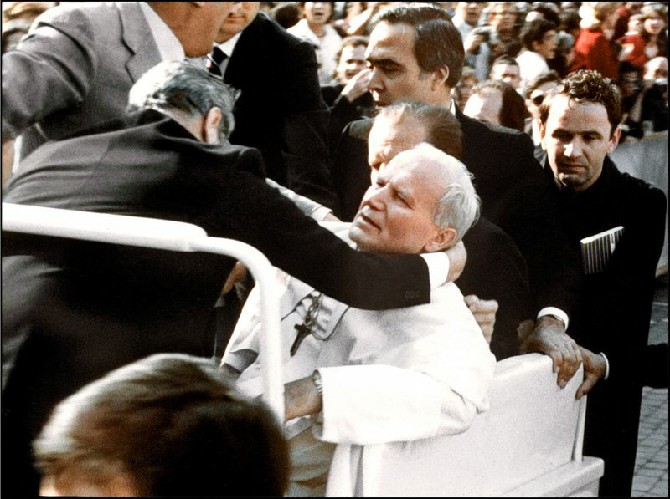 The Pope has been shot four times as he blessed the crowds in St Peter’s Square in Rome.
Surgeons have performed a five-hour operation and say they hope he will make a full recovery.
At about 1715 local time, the Pope was being driven in his Popemobile through a crowd of about 20,000 worshippers when he was hit by four bullets fired from a 9mm pistol some 15 feet away.
Two struck him in the stomach, one in his right arm and the fourth hit his little finger.
Police arrested a 23-year-old man who said he was a Turkish citizen and gave his name as Mehmet Ali Hagca.
He kept repeating: “I couldn’t care less about life.”
The Turkish press has reported Hagca was jailed for the killing of Turkish newspaper editor Abdi Ipecki in February 1979. But he escaped from prison and left behind a letter vowing to kill the pontiff just before the Pope visited Turkey in 1979.
Many of those who witnessed the shooting in the crowded square burst into tears, or screamed and fell to their knees in disbelief.
The Pope collapsed and was driven at speed into the Vatican complex and from there by ambulance to hospital.
Vatican Radio has appealed to the world to pray for his survival.
The Queen and the Archbishop of Canterbury have expressed their shock and deep sympathy for the Pope and his followers.
Pope John Paul II, formerly Cardinal Karol Wojtyla of Poland, became Pope in 1978. He is the first non-Italian pope in 455 years.
He is also the most widely travelled pontiff in the Vatican’s history. Vatican officials have often said in private that they feared for his safety during his frequent contacts with enthusiastic crowds wherever he goes.

The Pope came out of hospital two weeks later but was re-admitted on 21 June with a lung infection.
He did eventually make a full recovery and went on to visit 50 countries in the first decade of his pontificate.
Mehmet Ali Hagca was sentenced to life imprisonment in July 1981 for the shooting.
The Pope later publicly forgave Agca and even visited him in prison. In June 2000, with the agreement of the Pope himself, Agca was pardoned by the Italian president after serving 19 years.
On his return to Turkey he was re-arrested and forced to serve the rest of his sentence for the killing of a Turkish journalist in 1979. He was released in January 2006.
The Pope died at 2137 (1937 GMT) on Saturday 2 April 2005 after he failed to recover from a throat operation due to breathing problems.