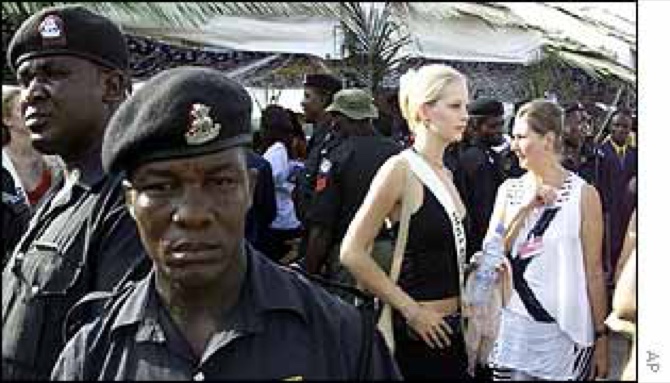 The Miss World contest is moving to London from Nigeria after riots by Muslim youths opposed to the show left more than 100 people dead and 500 injured in the city of Kaduna.

The pageant’s organisers said the show would be held in London on 7 December instead of the Nigerian capital, Abuja.

In Abuja, police say they have regained control of the streets after violent protests spread to the city over the plans to hold the contest there.

In a statement, the pageant organisers said the change of venue was in the “overall interests of Nigeria and the contestants”.

The contestants were under pressure to pull out of the event even before they arrived in Africa. Campaigners protesting against the death sentence imposed on a young Nigerian woman called Amina Lawal urged a boycott of Miss World.

On 22 March this year, the 31-year-old woman was sentenced to be stoned to death by an Islamic court in the northern state of Katsina for bearing a child out of wedlock after she was raped. Her lawyers are appealing the decision.

Kaduna – a city in the mainly Muslim state of Zamfara which has a large Christian minority – is now under curfew.

Nigerian President Olusegun Obasanjo went on television along with religious leaders to appeal for national calm, blaming a media report, not the contest itself, for the violence.

“It could happen at any time irresponsible journalism is committed against Islam,” he said.

Trouble had been brewing since the arrival of the contestants earlier this month. Many Nigerian Muslims were incensed that the event, already an affront to their conservative ideas about feminine modesty, would be held during the holy month of Ramadan.

At first the protests were confined to angry statements by Islamic leaders and religious scholars.

Then on 16 November when ThisDay, a Nigerian daily, published an article written by 21-year-old journalist Isioma Daniel in which she suggested the Prophet Mohammed might have married one of the contestants.

Many Muslims were deeply offended, and on 20 November youths in Kaduna sacked and burned a local office of the newspaper. Two days ago the fighting degenerated into a vicious round of sectarian bloodletting, as rival gangs of Muslims and Christians burned places of worship and attacked each other.

Troops and police responded in force, and yesterday the Red Cross said about 100 had been killed with the streets of Kaduna scattered with bodies.

The following day the 92 Miss World contestants arrived in England much to the relief of their family and friends.

They left behind them scenes of carnage in Nigeria – the final number of dead was 215.

Two days later the deputy governor of Zamfara announced the state government had passed a fatwa, or religious edict, on journalist Isioma Daniel in spite of numerous apologies made by ThisDay newspaper.

She fled to the United States on 27 November and is still living in hiding even though the Nigerian government said it would not allow her to be harmed by any fatwa that was issued.

Miss World was moved to London and on 7 December Miss Turkey won the competition.

Amina Lawal won her appeal against the death sentence in September 2003.