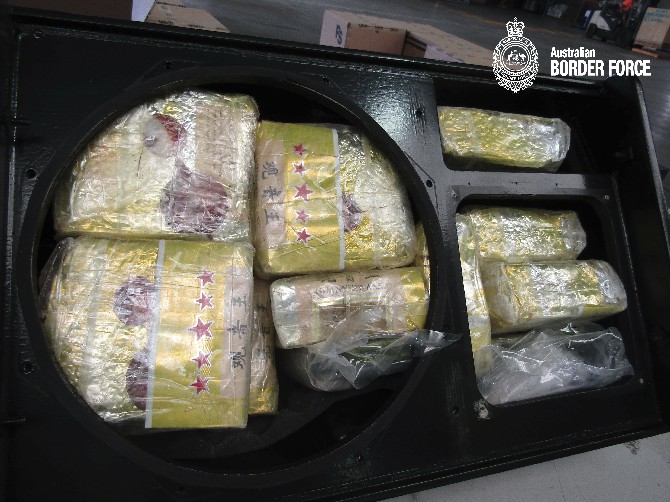 Two customs agents and an information technology worker appeared in a court yesterday charged with drug offenses over Australia’s largest seizure of methamphetamine, which had been smuggled to Melbourne from Bangkok in stereo speakers.
Police estimate the 1.6 metric tons of the drug also known as ice and crystal meth had a street value of AUD1.197 billion ($818 million). The 37 kilograms of heroin also seized was the largest haul of that drug in Australia since 2017, police said.
“It’s almost a quarter of the annual usage in Australia, so this will have an impact,” Australian Federal Police Deputy Commissioner Neil Gaughan told reporters, referring to the crystal meth.
Married customs agents Rachel Cachia, 37, and Donovan Rodrigues, 38 appeared with their co-accused Stephen Mizzi, 37, in the Melbourne Magistrates Court on drug importation charges that carry potential life prison sentences.
They did not enter pleas or apply for bail. They will remain in custody until they appear in court next on May 7.
Customs agents are private-sector employees who facilitate cargo movements through ports. They do not have security clearance at ports, but operate as independent import-export experts who know how the system works.
Gaughan alleged the couple were “middle-to-high up” in the drug trafficking operation.
“They are trusted insiders in the industry. They used their position of trust to circumvent the border controls that exist within Australia,” Gaughan said. “This vulnerability has been fully removed.”
Police were now working toward bringing the bosses of the operation to justice, Gaughan said.
The three were arrested after police executed search warrants on Wednesday at several Melbourne properties.
Australian Border Force officers detected the haul in vacuum-sealed packages concealed in speakers at the Melbourne waterfront in April.
The drug shipment came to Australia from Thailand, but Australian authorities suspect it originated from another Southeast Asian country, which they have not named.
A larger consignment of 1.7 metric tons of crystal meth bound for Australia was seized in California in January. Australian police said then it was the largest shipment of the drug bound for Australia and the largest ever domestic seizure in the United States.
Australia is an attractive market for international drug traffickers because of the relatively high prices that Australian drug users are willing to pay. Rod McGuirk, Canberra, AP