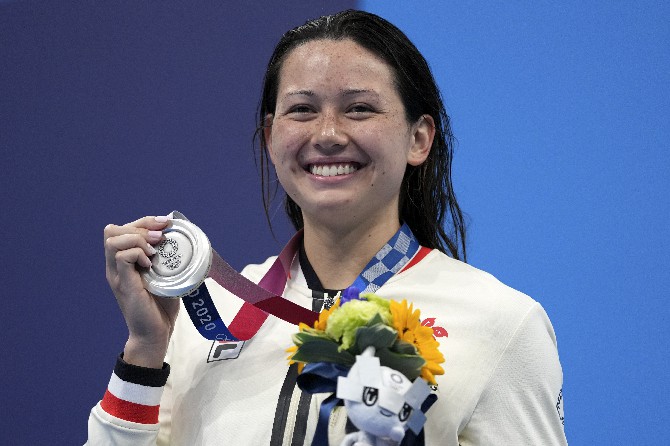 Siobhán Haughey had already made history at the Tokyo Olympics. Then she went out and burnished her legacy in the pool.
The 23-year-old swimmer from Hong Kong earned a silver medal in the 100-meter freestyle on Friday, to go with the silver she won in the 200 free two days earlier. They are the first swimming medals won by Hong Kong.
“This is crazy and surreal,” Haughey said. “The 200 free is always my main event, so the 100 is more like a bonus for me. My goal is just to go in and have fun and swim a best time and I did that.”
Her time of 52.27 seconds in the 100 free was topped only by Emma McKeon of Australia, who set an Olympic record of 51.96 to win.
“I didn’t have a lot of experience going into this race,” Haughey said. “I went another best time. It’s so surreal.”
Hundreds of people crowded a shopping mall in Hong Kong on Friday to watch Haughey. Her two silvers are among six medals won by the country since it first competed in the Summer Games in 1952.
“I’m just here having a good time,” she said, “and if that also means having great results it is so much fun.”
Haughey withdrew from the semifinals of the 50 free on Saturday morning because of a hip injury, according to her coach, Rick Bishop. He said it first bothered her during the 100 free, but she kept going. She finished 15th in the 50 free prelims.
Five years ago in Rio de Janeiro, Haughey finished 13th in the 200 free. She has won multiple medals at the Asian Games, East Asian Games, and Summer Youth Olympics.
“I feel like I was always so close,” she said, “so now finally being able to medal means so much.”
Born four months after Britain handed the sovereignty of Hong Kong back to China in 1997, she was raised there until leaving for the U.S. to attend the University of Michigan. She graduated in 2019 with a psychology degree and was a 15-time Big Ten Conference champion. Beth Harris, Tokyo, MDT/AP