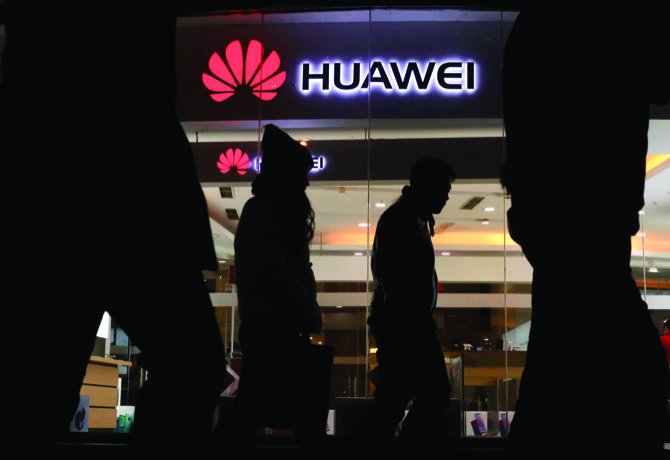 While a Huawei executive faces possible U.S. charges over trade with Iran, the Chinese tech giant’s ambition to be a leader in next-generation telecoms is colliding with security worries abroad.

Australia and New Zealand have barred Huawei Technologies Ltd. as a supplier for fifth-generation networks. They joined the United States and Taiwan, which limit use of technology from the biggest global supplier of network switching gear. Last week, Japan’s cybersecurity agency said Huawei and other vendors deemed risky will be off-limits for government purchases.

None has released evidence of wrongdoing by Huawei, which denies it is a risk and has operated a laboratory with Britain’s government since 2010 to conduct security examinations of its products. But the accusations, amid rising tension over Chinese technology ambitions and spying, threaten its ability to compete in a sensitive field as carriers prepare to invest billions of dollars.

“This is something that’s definitely concerning Huawei at this stage, because there is a political angle to it and a business angle,” said Nikhil Bhatra, a senior researcher for IDC.

Huawei is no ordinary electronics supplier. The company founded in 1987 by a former military engineer is China’s first global tech brand and a national champion at the head of an industry Beijing is promoting as part of efforts to transform this country into a technology creator. It has China’s biggest corporate research-and-development budget at 89.7 billion yuan (USD13 billion) in 2017 – 10 percent more than Apple Inc.’s – and foreign customers can draw on a multibillion-dollar line of credit from the official China Development Bank.

That puts Huawei at the heart of strains over the ruling Communist Party’s technology aspirations, competition with Western economies and ties between companies and government, including possibly spying.

The company says it is employee-owned and operates independently. It denies it designs equipment to allow eavesdropping or that it is controlled by the Communist Party – a stance critics including some U.S. senators say is doubtful in China’s state-dominated system. The company notes it uses the same global components suppliers as Western manufacturers.

“Not a single shred of evidence against the company has ever been presented,” Huawei said in a written response to questions.

The company is the “most examined telecoms equipment vendor,” the statement said. It said foreign officials visit regularly to see “the lengths we go to assure them of the integrity of our technology.”

Huawei, headquartered on a leafy campus in Shenzhen, near Hong Kong, has been working on 5G since 2009 and is one of the major suppliers of the technology, along with Sweden’s LM Ericsson and Finland’s Nokia Corp.

The company whose technology winds up being adopted stands to reap billions of dollars from sales and license fees.

5G promises more than just faster mobile phone service. It is designed to support vastly expanded networks of devices from internet-linked cars and medical equipment to factory robots and nuclear power plants. Annual sales of 5G network gear are forecast to reach $11 billion by 2022, according to IHS Markit.

That makes it more politically sensitive, raises the potential cost of security failures and requires more trust in suppliers.

Even a “really minuscule” risk could disqualify a provider, said Andrew Kitson, head of technology industry research for Fitch Solutions.

But Kitson sees commercial motives behind the accusations against Huawei. He said many come from U.S. and European suppliers that are losing market share to Chinese rivals.

“There never has been any actual proof,” said Kitson. “They’ve only got to make a few insinuations for other governments to sit up and think, hang on, even if there is no proof, it is too much of a risk.”

Huawei took a new hit on Dec. 1 when its chief financial officer, Meng Wanzhou, was arrested in Vancouver on U.S. charges of lying to banks about transactions with Iran.

Huawei is more politically important than ZTE Corp., a Chinese rival that was nearly driven out of business after Washington blocked it from buying U.S. technology over exports to Iran and North Korea. President Donald Trump restored access after ZTE paid a $1 billion fine, replaced its executives and hired U.S.-picked compliance officers.

That won’t work with Huawei, which is the “key to Beijing’s aspirations to lead globally” on 5G, said Eurasia Group in a report. It said Chinese leaders would see an attempt to impose ZTE-style controls as “tantamount to an open technology war.”

Huawei’s U.S. business evaporated after a 2012 congressional report labeled the company and ZTE security threats. The same year, Australia banned it from bidding on a national high- speed broadband network.

Taiwan, the self-ruled island Beijing claims as its territory and regularly threatens to attack, imposed curbs in 2013 on Huawei and other Chinese telecoms technology. Lawmakers are discussing expanding the controls.