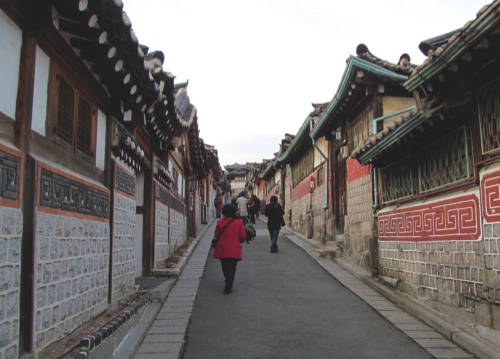 South Korea’s hyper-efficient capital doesn’t immediately spring to mind when you think of exotic Asian destinations. But this mega-city offers much to tempt travelers beyond a layover from the ultra-modern international airport in nearby Incheon. You can explore Korea’s rich historic heritage, visiting temples and palaces; wander around the enormous National Museum of Korea, and savor the delights of its surprisingly varied cuisine. 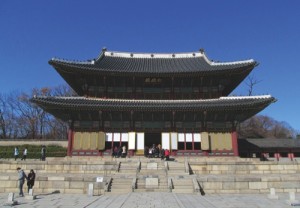 One of the main buildings at Changdeok-gung palace compound, a UNESCO World Heritage Site

As in Tokyo and Hong Kong, Seoul’s transportation network puts most European and North American cities to shame. Invest in a Seoul City Pass Plus card, which can be used not only on the trains, which run both under and above ground, but also on buses and even taxis. It’s also accepted for payment at many tourist sites and convenience shops, offering discounts on some tours and museum admissions.
High on your list will be one or two of Seoul’s five palaces. Most guidebooks recommend Gyeongbok-gung, the grandest of all of them. But I headed to Changdeok-gung, a UNESCO World Heritage Site, instead. The sprawling palace grounds can only be visited on guided tours; check the schedule to make sure you catch a tour in the right language. There’s one tour of the famous gardens and another of palace buildings.
Strategically and culturally, Korea is wedged between East Asia’s superpowers, Japan and China. As you travel around Seoul, you’ll understand the intricate connections among the three countries. Many links are evident in the collection at the National Museum of Korea, a must for those seeking to go beneath Seoul’s veneer of technology and learn about the country’s history.
The museum, the largest in area in Asia and sixth-largest in the world, is suitably impressive from the outside, with a futuristic architectural design that pays tribute to Korea’s modernization. Inside, many of the more than 300,000 pieces are designated National Treasures of Korea. The building design utilizes natural light in many galleries, which makes it easy to explore for hours without that feeling you get in big museums that you’re stuck in a vault all day. Highlights include Buddhist bells on the third floor (one each from Korea, China and Japan) and, the piece-de-resistance, the Ten-Story Pagoda, a unique marble structure built in the 14th century, looming over the ground floor. It was taken to Japan before World War II (Japan occupied Korea from 1910 to 1945), but was returned to Korea in 1960, disassembled. It’s been painstakingly restored and is an enduring symbol of an architecture style little-known outside their country. 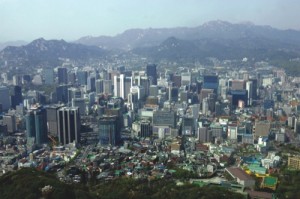 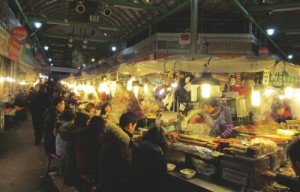 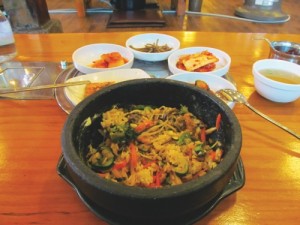 Koreans love to shop and there’s nowhere better for it than the pedestrian shopping district of Myeong-dong, where I stayed. Streets are lined with brand name-stores (both Korean and Western) open late into the night. It also has countless restaurants and cafes. On my first night there, I ventured out to find a restaurant near my hotel and had a near-panic attack. There were so many choices, but none familiar to me, though I’d gone to many Korean restaurants in New York. I ended up in a brightly-lit place that was almost ready to close. I pointed out a few menu items and a hot barbecue top was turned on at my table, ingredients meticulously lined up to cook. I tried to stir them together but the waitress, half-amused but also stern about my culinary ineptitude, took the ladle from my hand and set it aside. “Needs to cook more,” she mumbled. Every time I tried to touch the food with my chopsticks, other diners looked on with amusement. Clearly, I had no idea what I was doing. Mercifully, the waitress ultimately came over and stirred up a delightful chicken and vegetable dish with rice. I added kimchi from the buffet.
Another essential stop is Gwangjang Market, which bustles with street food vendors and little restaurant-shacks in the evening when its shops have closed. Locals go there for Korean pancakes made from mung beans called bindaeddeok and cheap street food. I opted for one of the ubiquitous dumpling soup places, where for about USD5 you get a huge bowl of steaming soup with pork dumplings, freshly made before your eyes. In winter, the stall benches are even heated. On my second visit to the market, I had sashimi and rice wine. The sashimi was near-frozen, a common way of serving it there and different from the Japanese room-temperature tradition.
For traditional Korean food beyond the market, skip Korea House — it’s touristy and expensive. Do venture into one of the tent restaurants that serve food late into the night in popular nightlife districts. And get your fix of bibimbap — a rice dish with vegetables, egg, meat and chili or soy sauce served all over the city — along with a traditional seafood stew, which is hearty and warm.
Bukchon Village, a neighborhood of traditional Korean houses with slanted roofs, is a nice place to stroll. The area is flanked by two palaces, and dotted with chic boutiques and cafes.
One striking thing you’ll notice is that Seoul’s residents are glued to their cellphones — usually Samsung or LG, brands that have played a role in Korea’s strong economy. During my visit last winter, everyone was streaming the Olympic games live on cellphones on the subway — a testament to how fast and reliable the 4G network is. Even my American phone worked faster there than in New York.
Finally, don’t leave Seoul without venturing up to the N Seoul Tower, the city’s highest tourist point, offering a view from the top at nearly 480 meters above sea level. You can hike through Namsan Park, Seoul’s Central Park, to the base of the tower, or take a cable car up. It’s busy at dusk, but a nice time to watch as the city below you transforms into a stunning and colorful display of lights. Amir Bibawy, Seoul, AP