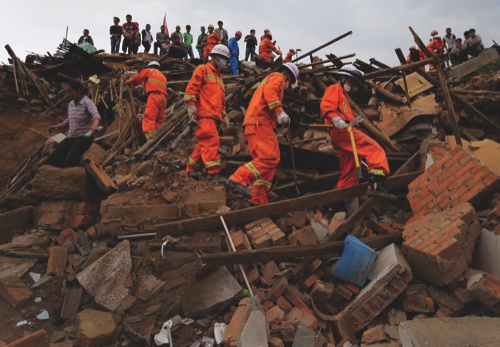 Rescuers and a villager walk past rubble from destroyed houses following a massive earthquake in the town of Longtoushan in Ludian County, Yunnan Province

About 10,000 troops used pickaxes and backhoes to clear roads and dig residents from collapsed homes yesterday after an earthquake in southwest China that killed 410 people. Groups of volunteers, meanwhile, used their bare hands.
Jackson Zeng joined about two dozen classmates who headed to Yunnan province’s Ludian county, where Sunday’s 6.1-magnitude earthquake collapsed thousands of homes in an impoverished region of mountainous farmland.
“I grew up around here and these are my people. I’m not sure what I can do, but I will help any way that I can,” said Zeng, a third-year student at Kunming University of Science and Technology.
Zeng’s black T-shirt contrasted with the scores of green fatigue-clad troops along the main road into the quake zone. Paramilitary personnel with a backhoe and other heavy equipment pushed earth from a stretch of road affected by a landslide, while Zeng and other students used their hands to push rocks over a cliff.
Many hundreds of volunteers have converged on the nearby city of Zhaotong en route to the quake-hit areas — a typical phenomenon during disasters in China. Many came empty-handed, but some were formed into company-sponsored units complete with uniforms and their own relief aid to distribute.
The government also has sent thousands of tents, quilts, sleeping bags and cotton coats to the region, as well as folding beds, chairs and tables, and mobile toilets.
A 5-year-old boy was dug from a collapsed home Monday, and yesterday, state media released a photo taken in a hospital of two pregnant women who comforted each other while trapped in the rubble before they, too, were rescued.
Many of the homes in Ludian, which has a population of about 429,000, were rudimentary mud-brick structures that collapsed easily in the quake.
Cai Jiangping, a 46-year-old corn farmer, pointed to where he and seven members of his extended family had lived on the other side of a river valley just south of Longtou.
“The house is a complete write-off. But we’ll throw some plastic over it and then talk to the insurance company,” he said.
Cai was sheltering with a group of friends, his motorcycle his only surviving possession. AP