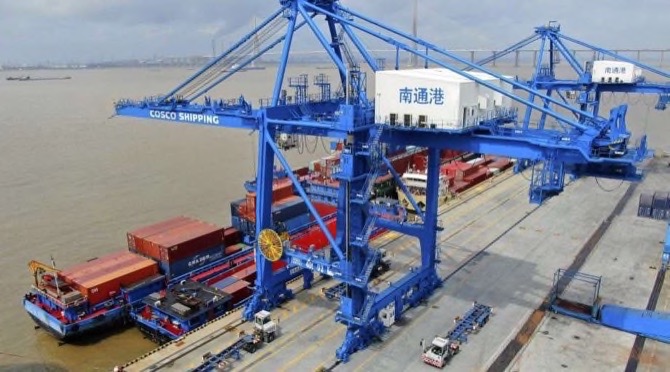 Trump said that “so far our consumer is paying nothing” from the levies imposed on China, repeating a widely-challenged assertion that China, not U.S. importers and consumers, pay the tariffs.

And he included one of his regular digs at the U.S. central bank, which he contends increase interest rates too high in 2018 and has been too slow to change course: “No help from Fed!”

The 10% tariffs on another USD300 billion in imports from Sept. 1 proposed on Thursday would target a wide range of goods, from smart-phones and other electronics to clothing to toys, hitting American consumers more directly than previous rounds of tariffs.

Trump, who’s spending the weekend at his golf course in New Jersey, also tweeted on Saturday that “countries are coming to us wanting to negotiate REAL trade deals” and that they “don’t want to be targeted for Tariffs by the U.S.”

The latest U.S. moves mark an abrupt escalation of the trade war between the world’s largest economies, shortly after the two sides restarted talks after a hiatus. Beijing pledged on Friday to respond if the U.S. insists on adding extra tariffs to the remainder of Chinese imports.

“China has to do a lot of things to turn it around,” Trump said at an event on Friday. “Frankly if they don’t do it I could always increase it very substantially.”

“If the U.S. is going to implement the additional tariffs, China will have to take necessary countermeasures,” Foreign Ministry spokeswoman Hua Chunying said at a regular briefing in Beijing on Friday. She didn’t elaborate on what the measures would be.

“China won’t accept any maximum pressure, threat, or blackmailing, and won’t compromise at all on major principle matters,” Hua said.

The S&P 500 Index fell for a fifth straight day on Friday, recording the biggest weekly decline of the year. The Stoxx Europe 600 index also slumped, as did equity markets in Asia. The offshore yuan moved closer to a record low.

White House economic adviser Larry Kudlow, in an interview on Bloomberg Television, confirmed the administration is planning to impose the 10% tariff on some Chinese imports on Sept. 1, but signaled there’s a chance it might not. “A lot of good things can happen in a month,” he said.

The threat to tax practically all U.S. imports from China marks the biggest escalation so far taken by the Trump administration and brings a surprise end to a truce that had only been in place since he met Xi Jinping, his Chinese counterpart, in Osaka at the end of June.

Bureaucrats in Beijing were stunned by Trump’s announcement, according to Chinese officials who’ve been involved in the trade talks.

“Imposing new tariffs is absolutely not the right solution to trade frictions,” he told a local Chinese television station while attending an Asean meeting in Bangkok.

The strained relationship between Washington and Beijing is showing up in economic data. Through the first six months of the year, China was the third-largest U.S. trading partner, trailing Mexico and Canada and slipping from the top spot it held in 2018. America’s merchandise trade deficit with China widened in June to a five-month high despite Trump’s effort to narrow it.

China’s response is complicated by the fact that the Communist Party’s top leadership is likely decamping this week to the seaside resort of Beidaihe for their annual two-week policy conclave. Officials from Xi downward disappear from public view as they privately debate policy.

“For the Chinese, Trump is losing his last bit of credibility here, and whether the talks can be held in September as scheduled has been put into question,” said Zhou Xiaoming, a former Commerce Ministry official and diplomat. “Deal or no deal, China is prepared for the worst-case scenario.”

In a tweet, Trump said China had not lived up to a promise Xi made in Osaka to buy U.S. agricultural goods and to halt illegal exports of fentanyl. The president later told reporters he’s “not concerned at all” about the negative reaction from markets.

Trump has repeatedly complained that China hasn’t made the “large quantities” of agricultural purchases that he claims Xi promised when then they met in Osaka, but what was actually promised has never been made public and the two sides’ interpretations appear to differ.

China’s purchases from U.S. farmers have clearly declined over the past year, with buying of soybeans falling in the first half of this year to the lowest level in more than a decade. At the same time, over the last two weeks China has approved the purchase of up to 3 million tons of soybeans, 50,000 tons of cotton, plus pork, corn and sorghum from the U.S. as part of “goodwill” measures.

Six people familiar with the discussions said that during meetings with U.S. Trade Representative Robert Lighthizer and Treasury Secretary Steven Mnuchin in Shanghai earlier this week the Chinese side had made no new proposals. That had left the way out of an impasse in talks over the substance of a deal that the two sides hit in May unclear, which prompted the administration to decide to increase pressure further on Beijing at a White House meeting Thursday.

Trump said there were no plans to reverse a decision made in Osaka to allow more sales by U.S. suppliers of non-sensitive products to blacklisted Chinese telecoms giant Huawei Technologies Co.

In a series of tweets announcing the new tariffs, Trump left the door open to further talks. Both China and the U.S. said after this week’s talks that their negotiators would regroup in Washington in early September. People close to the administration said they were still planning for those talks to go ahead. MDT/Bloomberg