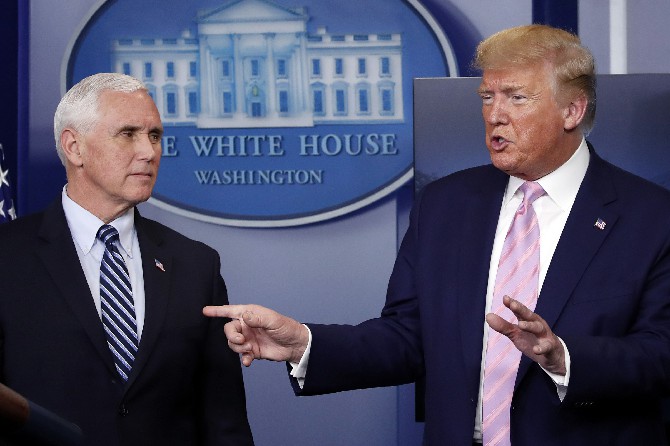 President Donald Trump has held an unequivocal position about China and the coronavirus — several of them.
Trump initially praised China, then excoriated Beijing after it made unsubstantiated claims that the virus originated in the United States. Now, Trump is back to offering niceties.
The diverging messages have generated finger-pointing by both Beijing and Washington that is further destabilizing a critical relationship between countries with the two largest economies and militaries.
There might not be radical shifts in U.S.-China policy during the next several months, but China’s cover-up and disinformation campaign will color the relationship going forward, Dan Blumenthal, director of Asian studies at the American Enterprise Institute, said yesterday [Macau time].
“It’s very hard to see progress on trade talks after this,” he said. He added that he expects Congress will push to address American dependence on China for medical and other manufacturing supplies.
There are calls in Congress to hold China accountable for initially covering up the outbreak. Anticipating a backlash, China’s official Xinhua News Agency last month suggested that Beijing could retaliate against the U.S. by banning the export of medical products that would leave the U.S. stuck in the “ocean of viruses.”
Early in the outbreak, Trump lauded China for its response to COVID-19, tweeting on Jan. 24 that the U.S. appreciated Beijing’s efforts and “transparency,” even though local Chinese officials initially covered up mounting cases in Wuhan, the city where the virus was first reported. In February, as the virus began to spread in Europe, Trump still refrained from blaming China.
Then Trump started going after Beijing, repeatedly calling COVID-19 the “Chinese virus.” He said he was upset that some Chinese officials had suggested without evidence that the U.S. military transported the virus to Wuhan or that the virus was released from a U.S. lab.
A Chinese foreign ministry spokesman, Zhao Lijian, tweeted March 12: “It might be US army who brought the epidemic to Wuhan. Be transparent! Make public your data! US owe us an explanation!”
Other U.S. officials chimed in. Secretary of State Mike Pompeo called COVID-19 the “Wuhan virus” six times in one State Department briefing. He chastised the Chinese Communist Party for not allowing U.S. medical experts into the country, kicking Western journalists out and cracking down on the flow of information.
The National Security Council at the White House also has accused the Communist Party of launching disinformation campaigns around the world and retaliating against Chinese citizens who wanted to tell the public about the coronavirus.
The president has said China was trying to blame the United States to distract the world from the shortcomings of Beijing’s own response.
“It could have been stopped in its tracks,” Trump said March 19 at a coronavirus task force briefing at the White House. “Unfortunately, they (Chinese officials) didn’t decide to make it public. But the whole world is suffering because of it.”
Trump abruptly stopped calling it the “Chinese virus” shortly after China’s ambassador to the U.S., Cui Tiankai, appeared to split with Zhao, calling the theory “crazy” and saying that it was not for diplomats to speculate.
Now the president is praising Chinese President Xi Jinping again.
“We have a great trade deal and we would like to keep it. They would like to keep it and the relationship is good,” Trump said yesterday. He noted that some of China’s numbers on COVID-19 cases seem a bit “low,” but he insisted his relationship with Xi remained “really good.” AP