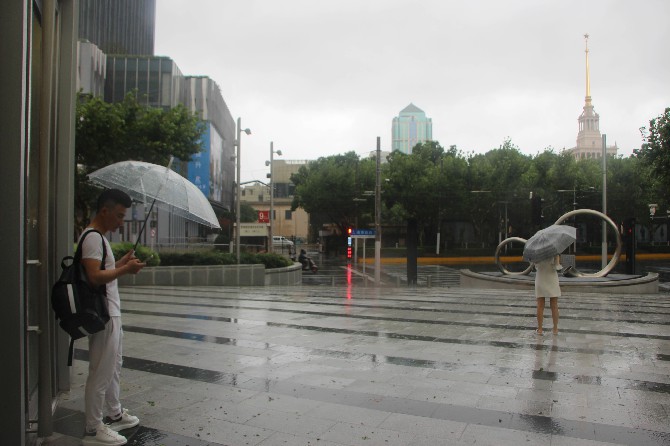 A typhoon blew heavy rain across the Shanghai region yesterday, filling roads and low-lying areas with water and felling billboards and signs on its second landfall in eastern China.
Flights and trains were canceled and many offices were closed, including the U.S. consulate, in Shanghai. Kindergartens, parks and the famous riverfront Bund also closed. Nearly 500,00 people have moved to shelters and others have been told not to leave home unless absolutely necessary.
Local authorities said the winds have felled some 30,000 trees, 268 billboards and shop signs. Power cuts affecting 110,000 users with 12,700 households still without electricity. Subway services in Shanghai were partially suspended to guard against possible flooding.
At noon, Typhoon In-fa was centered about 60 kilometers to Shanghai’s southwest, packing sustained winds of about 100 kilometers per hour. It made its first landfall Sunday in Zhejiang province just south of Shanghai, then moved north across Hangzhou Bay before hitting land again on Shanghai’s southern edge.
In Zhejiang, more than 1.5 million people have been transferred to safety, according to the provincial government.
The provincial government warned of possible mountain torrents in 23 districts and counties. A less severe alert was issued in neighboring Jiangsu province, where nearly 10,000 people were evacuated to safety.
No deaths or injuries have been reported, although losses to agriculture are expected to be heavy. The typhoon had earlier dumped rain on Taiwan.
In central China, rescue work was continuing and supplies were being trucked to the city of Zhengzhou after flooding that killed at least 63 people, including 12 in the city’s subway station.
In-fa is expected to move north-northwesterly further inland, weakening steadily as it goes. MDT/AP