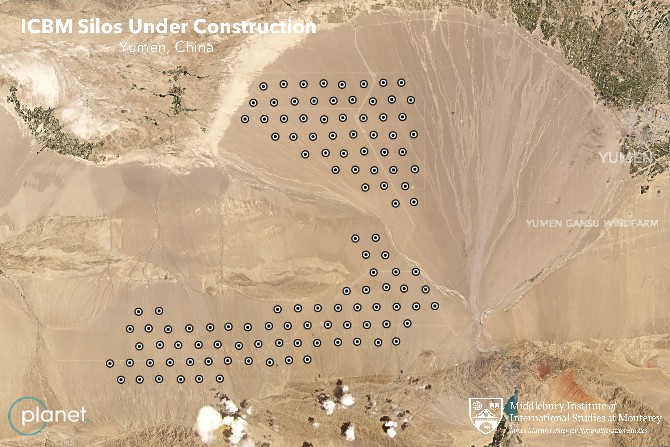 The U.S. military is warning about what analysts have described as a major expansion of China’s nuclear missile silo fields at a time of heightened tension between Beijing and Washington.
Researchers at the Federation of American Scientists estimate that China has approximately 250 underground missile silos under construction after they used satellite imagery to identify a new field being built in western China.
U.S. Strategic Command tweeted a link Wednesday to a story in The New York Times on the federation’s findings, which were published last week.
“The public has discovered what we have been saying all along about the growing threat the world faces and the veil of secrecy that surrounds it,” said Strategic Command, which oversees America’s nuclear arsenal.
The field in the Xinjiang region is the second one reported this summer. In June, researchers at the James Martin Center for Nonproliferation Studies in California identified another field under construction in neighboring Gansu province.
China has not commented on the reports. Asked about the latest one, the Foreign Ministry said Friday that it was not aware of the situation.
The reports come at a time when relations between the U.S. and China have plunged to their worst level in decades. The two nations remain sharply at odds over a range of issues, including trade, technology and cybersecurity.
The editor of the state-owned Global Times newspaper said this week that U.S. institutions and the media are hyping the reports about the missile fields to pressure China, but that the nation shouldn’t be cowed.
“Look at what American politicians are saying about China and look at the provocative actions of their warplanes and warships near China,” Hu Xijin said. “China must fully step up construction of its military force and nuclear deterrence as the cornerstone of its national security.” Huizhong Wu & Jon Gambrell, Taipei, MDT/AP